What happens when religious sisters get back in the classroom 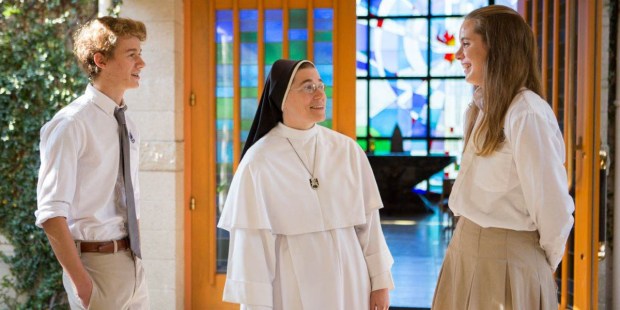 Having nuns as teachers is a luxury today, but here’s an inside look at what it’s like to be one of the lucky ones.

While religious sisters were commonplace in Catholic schools just a couple of generations ago, they have largely been replaced by lay teachers today. This is a reflection of the dramatic decline in the numbers of women religious in the U.S.: in 1965, there were nearly 180,000 sisters as compared to about a quarter of that number today, or 45,000, at a time when the U.S. population rose from 194 million to 325 million.

Yet while Catholic sisters have been typically departing Catholic schools, there are a few traditional orders involved in teaching that are sending young, competent Catholic teacher-nuns back to Catholic schools, to the delight of pastors, parents and students.

The staff of Marin Catholic High School in the Archdiocese of San Francisco includes four Dominican Sisters of Mary Mother of the Eucharist among its 70 teachers who serve 800 students. The sisters first came to the school in 2011 at the request of Bishop Thomas Daly of Spokane, who previously served as the school’s president. The bishop met Mother Assumpta, superior of the community, while on pilgrimage at Lourdes, France.

The school’s current president, Tim Navone, said, “The meeting was unplanned, so it was by chance, or rather by Providence.”

There was a long waiting list of Catholic schools wanting to have the sisters come and be part of the faculty, he noted, but after Mother met the bishop, “before you blinked the sisters were here.”

The Dominican sisters teach theology, geometry, chemistry and English, but are active in many other campus activities as well. They arrange student Holy Hours, Masses, retreats and programs to bring non-Catholic students into the Church. Navone said, “They’re looking for any way they can to help the souls of our kids.”

The sisters are “beloved” by the students, he continued, and being consecrated, they “are undistracted in their dedication to them.”

Navone has particularly noticed the rapid growth in conversions to the Catholic faith among non-Catholic students. Before the sisters’ arrival, he said, he’d typically lead a single student through the process of receiving the first sacraments, but with the sisters, the initiation program has grown “in spades.”

He continued, “We’re very lucky to have the sisters here. They’ve been a game changer for our school and have become a key component of our success.”

St. James Parish and School in Elizabethtown in the Archdiocese of Louisville, Kentucky, is served by four members of the order typically referred to as the Nashville Dominicans.  One is a teacher, another the principal and two serve in an educational capacity on the parish staff.

“It’s always been a prayer or dream of mine to work with the Nashville Dominicans,” said St. James’ pastor, Fr. Martin Linebach. “I tried to make it happen at my previous parish and it didn’t, but God helped me and this time, it did.”

The 2018-19 school year will be the sisters’ third at the parish school, which serves 500 students grades pre-K through 8. Additionally, one sister serves as Director of Religious Education and another the Director of Family Ministries on the parish staff; serving at the school and on the parish staff gives the sisters the opportunity to teach both students and adults. St. James is the only parish or parochial school in the Louisville archdiocese to have the Nashville Dominicans, and “I think a lot of people in the archdiocese have to confess jealousy,” Father joked.

For Fr. Linebach, the most impressive quality about the sisters is their joy, which is based on their Dominican charism. He said, “They are religious women in love with the Lord and the Church, and that is made visible in their love for people … it is a beautiful thing, to live the Catholic faith with such joy.”

The sisters’ joy has been contagious, awakening a positive spirit among the parish community, Father continued, “but they’ve made a bigger impact on me than anyone else.”

Adjustments had to be made to accommodate the sisters, however. The two sisters on the parish staff had to get used to life outside the classroom, and the parish had to adjust to the sisters living life in community. Father explained, “They have to go home every day at 4:30 p.m. so they can pray, eat and have a community life together. They’ve been a powerful witness for us, but we’ve all had to make adjustments to get to where we are today.”

Once a pastor puts in a request to the sisters that they come and staff a school, it can be a long wait, Fr. Linebach admitted. The Nashville Dominicans are “flourishing,” but the demand is high and their numbers compared to the Catholic population are few.  But once in place, they can make a tremendous contribution to a parish school and community. Father concluded, “The parish is most grateful for their presence. We’ve enjoyed a healthy, fruitful relationship.”