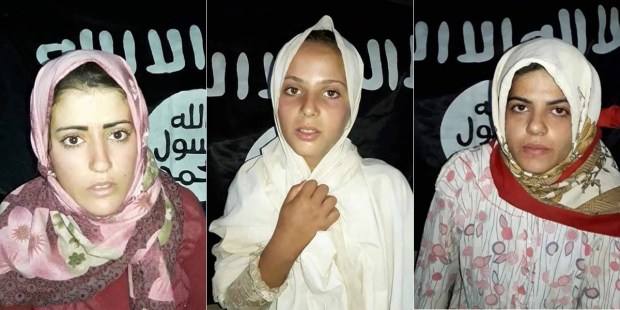 Photos of the hostages have gone viral on social media.

Militants from the Islamic State kidnapped 36 women and children in an attack in Syria’s Sweida province last Wednesday that also left at least 221 people dead, according to a report by the war monitoring group, Syrian Observatory for Human Rights.

Photos of the hostages were sent to the hostages’ families via WhatsApp according to a CBS News report, and show the kidnapped girls against a backdrop of ISIS’ black and white flag.

According to the Jerusalem Post, the Islamist militants have threatened to harm the women unless the the Syrian government halts its offensive against the rebel-held region in the Yarmouk Valley.

The abducted women and children were members of the minority Druze sect, which, according to the CBS report, have until now managed to avoid the Syrian conflict since it began in 2011. Wedneday’s attack was one of the bloodiest ISIS has waged.

According to the report, four women have escaped and two have died since Wednesday’s abduction, leaving 14 women and 16 children  hostages. of ISIS.

While ISIS has not claimed responsibility for the kidnapping, a video, which hasn’t been authenticated, shows a hostage making demands of the Syrian government.

CBS reported that religious leaders from the Druze sect have approached ISIS leaders to begin negotiations.

“As of Sunday, the hostages were still being held in the Badiya. Negotiations are happening between Daesh and Druze sheikhs,” said the CBS source.

The Syrian government, assisted by Russian forces, has conducted attacks in an area held by ISIS in the Daraa region for the last two weeks, according to CBS.

Since the Syrian conflict began, ISIS has resorted to mass abudctions to achieve its aims. ISIS militants kidnapped more than 220 Assyrian Christians in northeast Syria in 2015 and 270 Christians the following year, most of whom were released after negotiations, the report said.