Pope: Are you making yourself a human sacrifice to your idols? 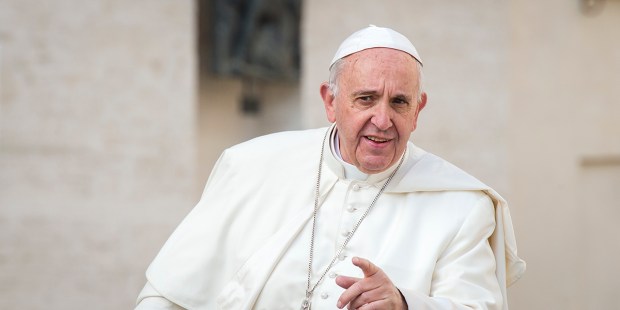 In general audience on the 1st Commandment, denounces tarot cards and palm readings, and many kids of idolatries

Today’s world offers a “supermarket” of idols and idolatry such as money, fame, and the worship of beauty, success, and power. However, these idols demand human sacrifices: neglecting our children (or even not having any), sacrificing a husband or wife (not getting married in favor of a career or supposed freedom), or family (not dedicating time to our loved ones, in order to gain money or fame). This was Francis’ warning in today’s general audience, as he took up again the theme of the Ten Commandments.

After a one-month summer break, the Bishop of Rome returned to this weekly meeting with the faithful, and in particular on this occasion, to the topic of idolatry. His preaching was inspired by the Bible: “You shall have no gods before me.” (Ex 20:3)

Read more:
You probably don’t think of the 10 Commandments like this! Check out the pope’s amazing insight

Francis said that human beings, whether or not they are believers, “tend to create idols.” What does “idol” mean? “The word ‘idol’ in Greek comes from the verb ‘to see.’ An idol is a ‘vision’ that becomes a fixation, an obsession for something that might fulfill our needs, and consequently, we seek it and do everything possible to acquire it, thinking that happiness lies therein,” he explained.

The idol of knowing the future

The pope affirmed that prayer should be directed to God, “our Father,” and that no one is exempt from the tendency to idolatry, “neither believers nor atheists.” He shared an anecdote from before he became a bishop: “I walked through a beautiful park. But in that park there were more than 50 small tables, each with two chairs, and people seated in front of each other. What were they doing? Tarot cards. They were there to ‘pray’ to their idol. Instead of praying to God, who is providence for the future.”

Read more:
Pope points out what God says BEFORE he gives the Commandments

“Idos,” the Holy Father continued, “demand worship, rituals; people prostrate themselves before them and sacrifice everything.” People put money, fame, or success before their family, children, or integrity of life.

Idols separate us from what is essential in life, he lamented. “They promise happiness, but don’t give it; and we find ourselves living for that thing or for that vision, caught in a self-destructive vortex, waiting for a result that never arrives. (…) The true God doesn’t offer a future projection of our success, but teaches us to love… The true God teaches us to live in the reality of each day, in what is concrete, not with illusions of the future.”

The idol of material possessions

An idol is “a projection of oneself on objects or projects.” Francis explained, noting how advertising uses this logic: “I don’t see the object as such, but I perceive that car, that smartphone, that role — or other things — as a means to self-fulfillment and to filling my existential needs.”

Idols, he continued, ask us to sacrifice everything: “In antiquity, human sacrifices were made to the idols, but today as well: for a career, people sacrifice their children, neglecting them or simply not having them.”

He also spoke of the idolatry behind the excessive cultivation of beauty: “Beauty asks for human sacrifices. How many hours in front of the mirror! (…) It’s not bad to put on makeup; but within a normal range, not trying to become a goddess.”

“People live in hypocrisy, doing and saying what other people expect, because the god of self-affirmation imposes it. And lives are ruined, families are destroyed, and young people are abandoned to destructive models—this too, in order to increase profits.”

Francis also denounced the fact that young people pursue the god of drugs. “How many young people ruin their health, even their lives, adoring this idol of drugs.”

Francis concluded by encouraging the people present, both pilgrims and locals, to “enter into your interior to recognize and eradicate the idols that have enslaved you, and in their place, put the true God, who will make you free and fully happy.”

Read more:
Pope has fresh take on foolishness: It’s a form of “not listening”