Pope Francis celebrated the feast of St. Ignatius with his fellow Jesuits 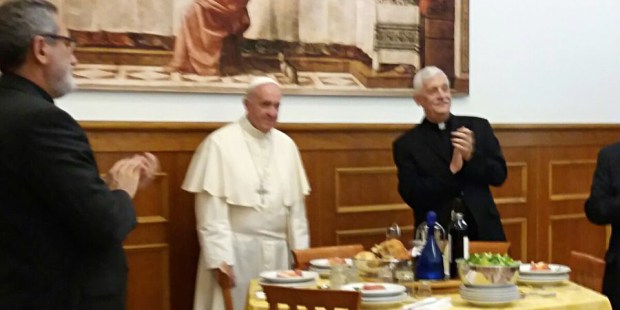 As is his custom, Pope Francis went to the General Curia of the Jesuits on July 31, to celebrate with his religious brothers the feast of their founder, St. Ignatius Loyola, who began the Society of Jesus in 16th-century Spain.

According to Father Fornos, the arrival of Pope Francis at the General Curia was a “simple and fraternal moment.” Since his election in 2013, every year — with the exception of 2015 — the head of the Catholic Church has celebrated the feast day of the founder of the Society of Jesus alongside his Jesuit brothers.

Pope Francis is the first Jesuit to be a Successor of Peter.

For the first feast of St. Ignatius of his pontificate, on July 31, 2013, the Sovereign Pontiff presided over a mass at the Roman Church of the Gesù, from where the missionary impulse of the Jesuits began. In other years, the celebration of this feast day has taken the form of a shared meal at the General Curia.

While being pastor of the universal Church, Pope Francis has kept a special friendship with the Society of Jesus. During his travels abroad, for example, he almost always reserves a moment for the Jesuits living in that country. The dialogues from these private meetings are usually transcribed later in the Italian Jesuit magazine Civiltà Cattolica.

Read more:
5 Things you didn’t know about Ignatius of Loyola