Why did Jesus institute the Eucharist? 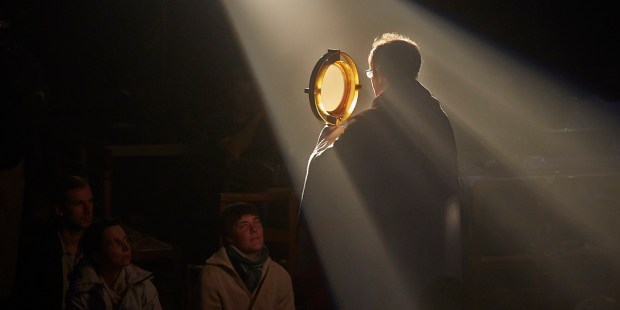 The soul-body unity that is the human being requires treatment that acknowledges both elements. And our Creator knows that …

It is as if we are two creatures in one, we human beings.

Bread is not enough.

Feeding the body is a central aspect of Christianity — from Jesus’ miracle at Cana to the loaves we heard about last weekend, to the Last Judgment when his test for each of us will be, “Who did you feed?”

As one 12th-century Church text put it: “Feed the man dying of hunger, because if you have not fed him, you have killed him.”

But Jesus has also always warned about stopping there.

When the devil tempted him to turn stones to loaves of bread, he refused, saying, “Man does not live on bread alone.”

Today, he hides from the people who want to celebrate him merely because they ate. “Do not work for food that perishes,” he tells them, “but for the food that endures for eternal life.”

Mother Teresa knew what this greater hunger looks like.

“Being unwanted, unloved, uncared for, forgotten by everybody, I think that is a much greater hunger, a much greater poverty than the person who has nothing to eat,” St. Teresa of Calcutta said.

Recent headlines about wealthy suicides would seem to make her point. But our hunger for meaning causes many behaviors that plague us, well short of suicide. There is the hookup culture on campuses, alcohol and drug abuse, even social media.

Clearly we have a gaping hole in our hearts that pains us terribly if we find no way to fill it.

As the Second Vatican Council put it, a human being “plunges into the depths of reality whenever he enters into his own heart; God, Who probes the heart, awaits him there; there he discerns his proper destiny beneath the eyes of God.”

The only way to satisfy our second hunger is to plunge in.

Jesus Christ in this Sunday’s Gospel refuses to settle for satisfying anything less than the deepest hunger he knows the people have.

This is why he instituted the Eucharist — to show as clearly as possible that he wants to enter into our lives and fill us with his life.

As the the Catechism puts it, “What material food produces in our bodily life, Holy Communion wonderfully achieves in our spiritual life.” In particular, “As bodily nourishment restores lost strength, so the Eucharist strengthens our charity.”

In other words, it immerses us in love, making it possible to “put away the old self of your former way of life” and “put on a new self, created in God’s way in righteousness and holiness of truth” as the Second Reading specifies.

The Eucharist can do wonders for us, if we receive the Bread of Heaven not just with our mouths but with our hearts and our lives.

After all, when we are hungry, we can’t think of anything else.

For me, at least, the longest 10 minutes of the day are the 10 minutes before dinner. And when the milk, eggs or bread run out, restocking them is a priority that trumps all other considerations — even if it means going to the store looking like you just woke up.

That is how hunger works: It demands food, now.

Our spiritual hunger has to work that way, too. But often it doesn’t. We are like hungry beggars invited to a feast who stand outside, too self-conscious to go in — too afraid of confession, too afraid of Christ, too afraid of ourselves.

We know we are hungry. We know where the food is. We have been invited to the table. What are we waiting for?