What happens when ‘Christopher Robin’ grows up and leaves Pooh behind 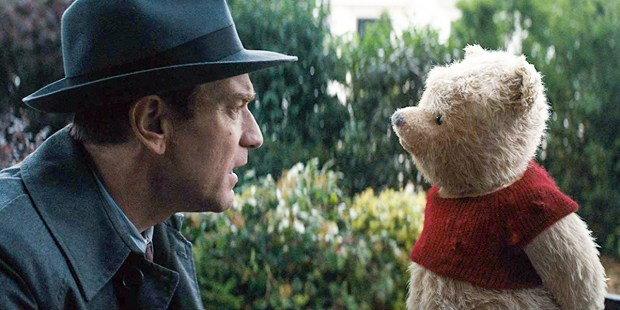 The new Disney film is magical for kids — but it has an important message for grownups, too, says producer Brigham Taylor.

Disney’s Christopher Robin is a fun, light, whimsical romp through a PG landscape. It’s as kid-friendly as movies come these days. But don’t let all that relatively wholesome frivolity fool you: This movie casts a more serious eye on the parents in the audience, too.

So says the movie’s producer, Brigham Taylor. As excited as he was to bring Winnie-the-Pooh, Piglet and all the rest of A.A. Milne’s timeless characters to life and, for the first time, into a more “photo-real” environment, he was especially eager to show these characters through a grown-up’s eyes, and “to tell a story that is relevant to us as adults.”

I talked with Taylor, who also produced 2016’s live-action version of The Jungle Book, earlier this week. He says that he first started thinking about a movie centered around an adult Christopher Robin 15 years ago.

“Which isn’t to say I’d been thinking maniacally for 15 years about this,” he said. “But since childhood I’ve loved the characters, and I felt like there was a way to reintroduce Pooh, and not just to kids.”

While Pooh, Christopher Robin et al have long been a beloved part of Disney’s animated canon, the stories about those characters have skewed younger recently, Taylor says, reaching even a preschool audience. To anchor Milne’s whimsical characters in a world that looks recognizable and realistic to us, he says, “would force us to sort of reassess who Pooh is and what does he mean to us specifically, as adult members of the audience.”

Pooh has long had a certain adult appeal. Type “Pooh quotes” into Google, and it’ll retrieve loads of pages of “wisdom” and “inspiration” from this bear of very little brain (even if half of Pooh’s quoted quotes were never penned by Milne at all).

But Taylor believes that Pooh has a lot to teach us wizened oldsters, especially in today’s shrill, frenetic environs. “Doing nothing,” Pooh says in the movie, “often leads to the very best of something.”

“I think Pooh is relevant always, and I think especially today,” Taylor says. “We seem to be getting more busy, and more distracted. And we’re even getting more siloed [and isolated] even in our downtime. … Pooh to me doesn’t just profess a philosophy about taking time and making time to just sort of do nothing — meaning doing your favorite things — he’s also about doing those things together. We always see Pooh not just as a solitary figure, but as someone who is holding the hand of his friend Piglet, or playing with Christopher. It’s about togetherness. And so those things are always important and valuable.”

The movie definitely emphasizes the importance of togetherness. Christopher Robin admits at one juncture that he’s “lost.” And he’s at his most lost when he’s alone — even going out of his way to be alone. He sends his wife and daughter, Madeline, to the family cottage in Sussex without him. When his neighbor repeatedly asks for a game of gin rummy, Christopher sidesteps or ignores the invitation. Indeed, Christopher’s physically hiding from his friendly neighbor when he runs into a very real, and a very lively Pooh for the first time as an adult.

“The concept of these characters unwittingly rescuing [Christopher Robin] from himself was kind of an appealing thing,” he says. “[But the movie’s about] Christopher Robin not just reconnecting with his old self, but to become integrated with his young family, which he’s sort of allowed himself to become estranged from.”

It’s not just about becoming a kid again, in other words, but becoming a better adult, too. How to understand what’s really of value in the world, and how to better love and support the people you care about the most. It’s a study on being present with the folks in their lives — something many harried, smartphone-toting parents could use a primer on.

“I think I’m guilty of this,” Taylor admits. “With our devices and our jobs and everything else, we are getting separated.”

But even though he acknowledges that work can pull him away from the moment, Taylor seems to enjoy what he does. He’s worked for Disney for 24 years now, his hands in everything from Tomorrowland and the Pirates of the Caribbean series to such underseen gems as Secretariat and Million Dollar Arm. Most of the films that he’s been involved in have had an inspirational quality to them. That’s no accident, Taylor says: It’s an extension of who he is and the company he works for.

“I think the first job is to be fun and to entertain, and I think Walt [Disney] would’ve said the same thing,” he says. “But underneath that, I think you want to send people away feeling better about themselves, and better about the world they’re in, than when they stepped into the theater. I don’t think there’s anything wrong with that.”

Taylor admits that re-working classic Disney properties, like The Jungle Book and Winnie-the-Pooh, for new audiences can be intimidating. But he feels a sense of guardianship for these properties. He loves the originals as much as the audience. And he wants to do right by them.

“More than being daunted by it, I feel really privileged and excited by these opportunities, especially when you feel confident that there’s a reason to do it,” he says. “And for [Christopher Robin], I think there was a reason to do it.”

Christopher Robin is in theaters now. You an check out the official trailer here:

Read more:
“Poor A.A. Milne”: In Which Winnie-the-Pooh is Reclaimed from Disney