US regulator responds to Vatican criticism of financial market practices 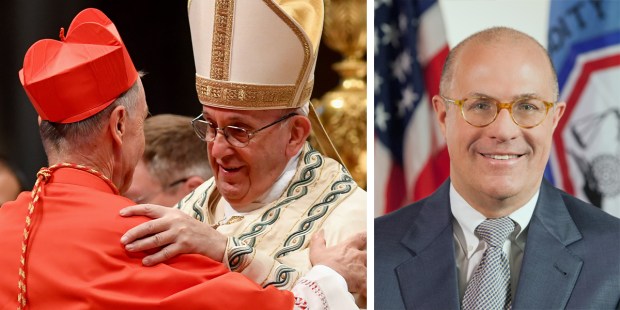 “We write to you as finance professionals striving to lead moral lives,” the letter said.

A U.S. government agency has responded to a statement by the Vatican about the current state of affairs in economics and finance, concluding with an invitation for further dialogue.

In May, two Vatican bodies—the Congregation for the Doctrine of the Faith and the Dicastery for Promoting Integral Human Development—issued “‘Oeconomicae et pecuniariae quaestiones.’ Considerations for an ethical discernment regarding some aspects of the present economic-financial system,” which lays out ethical foundations to govern economic and financial systems. The statement was highly critical of various financial instruments, such as derivatives and credit default swaps, and certain practices it said were unfair to consumers.

Then, on July 21, the chairman of the Commodity Futures Trading Commission, J. Christopher Giancarlo, and that commission’s chief economist, Brian Tuckman, wrote to the two Vatican bodies, offering their view on why they may have been misguided in their criticism.

“We write to you as finance professionals striving to lead moral lives,” the letter said. “One of us, Chairman J. Christopher Giancarlo, is a practicing Roman Catholic. We are also senior regulators of the world’s largest derivatives markets and officials of the U.S. Commodity Futures Trading Commission (CFTC), the world’s only derivatives-specific regulatory agency. The CFTC has overseen the U.S. exchange-traded derivatives markets for over 40 years.”

Throughout their letter, the CFTC officials referred to Oeconomicae et pecuniariae quaestiones as “the Bollettino,” Italian for Bulletin, and called it “an important and caring commentary on modern finance.” But they felt it was important to clarify just what derivatives are and what social utility they have.

Investopedia defines a derivative as “a financial security with a value that is reliant upon or derived from an underlying asset or group of assets. The derivative itself is a contract between two or more parties based upon the asset or assets. Its price is determined by fluctuations in the underlying asset. The most common underlying assets include stocks, bonds, commodities, currencies, interest rates and market indexes.”

“Derivatives products allow the risks of variable production costs, such as the price of raw materials, energy, foreign currency and interest rates, to be transferred from those who cannot afford them to those who can,” Giancarlo and Tuckman wrote. “They serve the needs of society to help moderate price, supply and other commercial risks to free up capital for economic growth, job creation and prosperity.

“For example, derivative products allow farmers and ranchers to hedge production costs and delivery prices,” they said. “They are the reason shoppers enjoy stable prices, not only in the supermarket, but in all manner of consumer finance from auto loans to household purchases. Derivatives markets influence the price and availability of heating in homes, energy used in factories, interest rates borrowers pay on home mortgages, and returns workers earn on retirement savings.

“Commodity derivatives markets provide a critical source of information about future harvest prices,” the CFTC officials explained. “For example, a grain elevator uses the futures market as the basis for the price it offers local farmers at harvest. In return, farmers look to prices set on futures exchanges to determine for themselves whether they are getting fair value for their crop.”

This financial instrument can be helpful in the Third World, Giancarlo and Tuckman wrote, citing a recent article in the Financial Times about the price boom in Madagascar’s vanilla crop. The absence of a functioning market for vanilla futures “underpins a violent boom and bust cycle in cash prices for the vanilla crop, exacerbating poverty and gang activity on the African island,” they stated.

And with the world’s population expected to reach about 9 billion in the next 30 years, the two said that with the help of well-functioning financial and derivatives markets, the US and other agricultural exporting nations “will play a big part in feeding the globe.” That, they pointed out, is a big concern of Pope Francis’s.

Max Torres, associate professor and director of management at the Catholic University of America, said that the financial instruments under discussion “seem to be much reviled by the tabloid press,” but “serve a viable public function.”

“They’re not just gratuitous means of throwing money around and trying to impoverish countries and companies,” Torres said in an interview. “They all have their moral basis.”

The CFTC officials also examined credit default swaps (CDS), which are a kind of insurance that investors or businesses can purchase to protect themselves in case something they invest in or have a financial interest in defaults. They listed some examples of how they are used:

The letter writers suggested that the Bollettino expresses deep reservations about the fourth scenario, which it seems to see as “gambling” that a nation will default. But governments in developing nations benefit from the availability of CDS on their sovereign securities, Giancarlo and Tuckman argued.

“Recent research has shown that the initiation of CDS trading on sovereign bonds lowers countries’ cost of debt and increases the information efficiency of their bond markets,” they wrote. “In fact, the greatest reductions in debt cost are enjoyed by the countries with the highest risks of default hedged through the use of sovereign CDS. Without such availability, bond holders would demand that governments pay higher interest payments to offset the additional risk to bondholders that in a crisis the only participants in CDS markets would be limited to other sovereign bondholders.”

“I call these things insurance policies,” Henry Schwalbenberg, director of the International Political Economy and Development program at Fordham University, said in an interview. “So I’m going to invest in some country’s bond, but I think that bond is a little dangerous. If these things didn’t exist, I would probably not invest in that bond. …  I can buy this policy, or this credit default swap, and they will pay it off, because they’re buying a whole bunch of these, and they know they’re not all going to go belly up, so if they go belly up they can afford it. But they’re going to charge me a fee, and I say, ‘Oh, that fee’s worth it, and then I’m guaranteed this stream of income, and I’m happy.”

CDS are “a way to mitigate risk and open up finance for poorer countries,” Schwalbenberg said.

The CFTC officials told Vatican officials that they would be happy to meet and discuss financial matters further. “We often travel to Europe for regulatory meetings so a quick stopover to your office would be entirely possible,” they wrote.

In that spirit, both Torres and Schwalbenberg expressed interest in holding forums at their respective universities to further investigate issues raised by the Vatican. Another commentator, Jean-Pierre Berliet, however, feels that both the Vatican and the CFTC are only scratching the surface.

“I believe, from my experience, and I think a lot of other people, that the financial crisis and those kinds of situations are baked into the structure of the financial system,” Berliet, an advisor on risk management and strategy to insurance companies, said in an interview. “Never mind what regulators say or pretend to have done. It’s in the inherent nature of financial systems that rely on what can be called, basically, the banking system as everyone has conceived of it, to produce crises. It will. It’s just a matter of when.”

Berliet, who like Schwalbenberg is a member of the Centesimus Annus Pro Pontifice Foundation, an organization promoting Catholic social teaching, said the practice of governments to take on the responsibility of protecting depositors introduces moral hazard in finance, “because now the bankers will not be totally destroyed if the government guarantees the viability of the system. And it offers this guarantee to the nation. It’s really a guarantee to the bankers. Guess why bankers love politicians, from right to left, it doesn’t matter who. Because it’s a splendid system. Politicians, through the government, give the businessmen bank charters that enable them to engage in lending and deposit taking while imposing on them to finance government operations and projects. Under this arrangement, indebtedness naturally increases. It fuels booms that benefit everyone, especially politicians, until booms turn to busts. When things blow up, politicians protect their position by bailing out the banking system and the bankers in the name of the national interest.”

He said the taxpayer shoulders the burden of that rescue, not the institutions.

“One of the moral questions is why is the guarantee provided by the state free?” he said. “Why is it not explicitly charged for, like it would be or should be? If you did that, you’d find that the people who run banking would suddenly become a lot more prudent. You would still have blow-ups, but at least the cost of the blow-up would be pre-funded through the charge. That would be insurance. So a lot of the game would be fundamentally altered, if you’d be willing to do that.”