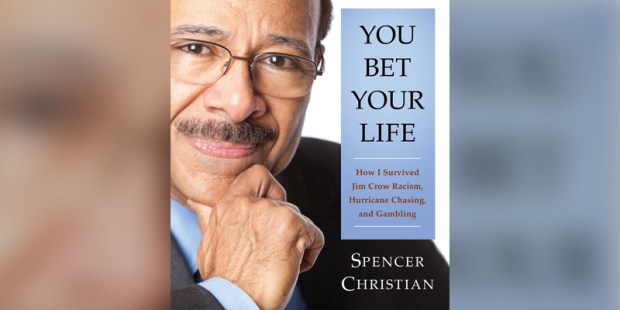 Emmy Award-winning broadcaster Spencer Christian was the happy-go-lucky weatherman on “Good Morning America” for 13 years, yet behind-the scenes, he experienced moments of “self-loathing.” The reason: he had a decades-long hidden gambling addiction that was ruining his life.

In his memoir “You Bet Your Life: How I Survived Jim Crow Racism, Hurricane Chasing, and Gambling,” Spencer recalls a particular moment after a run of bad luck at a craps table: “I was walking rapidly and nervously through the streets of Atlantic City – past hookers and derelicts, the homeless and the hopeless – wondering if I had anymore dignity than they did at that moment.”

During a “Christopher Closeup” interview (podcast below), Spencer explained why he continued to gamble despite it making him feel desperately low: “There was a certain thrill, a surge of adrenaline, a rush of excitement that I felt initially when I started gambling, especially when I was winning…That feeling of excitement had almost a narcotic effect. So when I began losing, I would desperately try to chase those losses. There was something inside me that said, ‘Your luck will change next time,’ or, ‘It’ll get better if you go to a different casino.’ So there were these competing forces inside me: the one side that was looking for that thrill of winning – and the other side that was feeling sick and ashamed of myself.”

Spencer grew up in a Christian family, so God had always been a part of his life. And he prayed all the time about his gambling issues – but he realizes now that he was praying for the wrong results.

He said, “Here’s what I was praying for most of the time: ‘Please relieve this pain and anxiety I feel.’ Or, ‘Please show me a way to get out of this debt and pay off these bills.’ Or, ‘Lord, lead me in a direction that helps me to get back in balance so I can continue the fun and enjoyment of this exercise without threatening the stability of my life.'”

“What I wasn’t praying for,” Spencer continued, “was, ‘Take away my desire to have this thing in my life. Take away the pleasure that I derive from it so I can find the strength to walk away from it and give it up.’ It wasn’t until I arrived at that point, probably after I had been gambling for a couple of decades, that I began to lose the desire and feel like God was leading me in a more purposeful direction.”

Spencer credits his parents, Spencer Sr. and Lucy, with modeling the faith, hope, and determination that allowed him to move beyond his addiction. This is especially noteworthy because, as African Americans in Virginia, they faced the harsh realities of racism that could have left them angry and bitter. Their belief in God, however, allowed them to choose a different road.

“God was present in our life every day,” Spencer recalled, noting that they emphasized leading “a Christ-like life.” One example of that kind of life stands out in Spencer’s mind: “My dad was a laborer, and we were poor black people in the old South..Yet when Christmas would roll around, my dad would take the last few dollars he had left over and buy a bunch of items, like fruits and candies and nuts, and he and my mom would make these little gift baskets. We would deliver them to people who were even poorer than we were, who had less than we had. That was the Christian example they put out there for my brother and me. So I grew up with that sort of practice of the faith.”

When Spencer himself experienced the injustice of Jim Crow racism, it was again his parents who looked toward a brighter future that would allow people of all colors to achieve the American dream.

He said, “I remember in my early childhood – when I was probably no older than four – asking them why I can’t use the bathroom here in the store where we shop. Why do we have to use that old dirty broken down water fountain that’s marked ‘colored,’ and why can’t I use the shiny clean one that says ‘whites only.’ And I remember the pained expression on their faces as they tried to explain to my brother and me, ‘Things are going to get better. We live in a world right now where we don’t have equal rights, and it is unfair, and it’s not right. And God doesn’t like it.’ They would point to every little advancement in the Civil Rights Movement as a reason for hope…One thing they used to say to us is that ‘Our God delivered our people from the bondage of slavery, and you can see evidence of that in the movement unfolding…My parents always pointed out to us that it was a righteous cause, a God-inspired cause no matter what faith or lack-of-faith the participants in the movement [held].”

Thankfully, Spencer’s parents got to experience “a better day of racial equality and justice and equal treatment under the law” and also enjoy the success he achieved on TV, which brought them “happiness, joy, and thankfulness that their prayers had been answered, that their children were now going to be able to enjoy these freedoms.”

Currently the weather forecaster for San Francisco’s ABC7 news team, Spencer relishes the fact that he has gotten opportunities to travel the world and befriend the most interesting people around, like Muhammad Ali. Yet one of the main lessons he learned from his time on “Good Morning America” came from the everyday people he met while covering floods, hurricanes, or tornadoes.

He said, “I saw people dealing with incredible adversity who, in many cases, had not spoken to their next door neighbors in 10 years or that had allowed petty, personal differences to come between them. And all of a sudden in these moments of extreme crisis and dire need, they would pull together, pray together, work together, cry together, hug each other. I saw relationships that had gone sour that were repaired. And people forgave each other and built new relationships because of the adversity they were facing together. So in having traveled to all 50 states on various assignments, and to four or five continents, I’ve seen so many examples of how the human spirit will not be defeated – and how tragedy and adversity often brings out the best in the human spirit.”

Though Spencer has faced struggles in his own life, he believes, as The Christophers do, in lighting candles rather than cursing the darkness. (And he even remembered our old TV theme song “One Little Candle”).

He concludes, “Because of what my parents taught me, I have practiced treating other people the way I want to be treated, being kind. If I recognize that someone’s having a rough day or is having some difficulty, I naturally feel a desire to bring a smile to their faces, let them know they are being acknowledged or recognized. And that’s such a simple thing to do. You don’t have to think about it and plan it. If you allow yourself to recognize that somebody may not be having a good day, and you go and share a little bit of your good feeling with them, then that’s lighting that candle. That’s what I’ve always tried to do.”

(To listen to my full interview with Spencer Christian, including his story about why some people call him Sven, click on the podcast link):