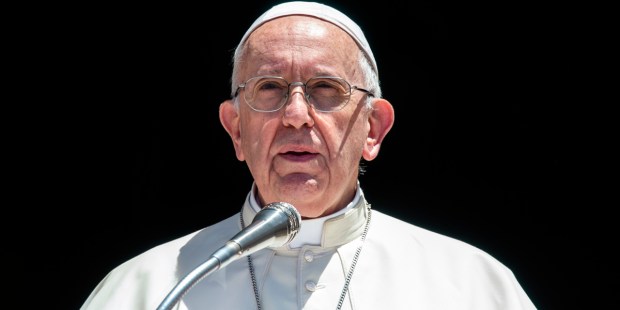 In insightful general audience, Francis notes how we react to our insecurities, and what the true solution is for dealing with them

Pope Francis gave an insightful address at today’s general audience, reflecting on the Golden Calf (Exodus 32:1-8) to explain human nature and our relationship with God.

— “What is the desert [where the Chosen People were wandering]? It is a place where precariousness and insecurity reign – in the desert there is nothing – where water is lacking, food is lacking, and shelter is lacking. The desert is an image of human life, whose condition is uncertain and has no inviolable guarantees.”

Francis noted how the insecurity of human life “generates in man primary anxieties,” such as what we’ll eat and what we’ll wear.

— What triggers the idolatry of the Chosen People? Pope Francis answered, by explaining that the reference point, who was Moses, was delayed on the mountain — he was “missing” for 40 days, and “this becomes unsustainable.”

The people ask for a “visible god to be able to identify and orientate themselves.”

“Human nature, to escape from precariousness – the precariousness of the desert – seeks a ‘do-it-yourself’ religion: if God does not show Himself, we make ourselves a made-to-measure god.”

Quoting the Psalms, the Holy Father noted that an idol will not ask us to abandon our securities. “Idols exist, we begin to see, as a pretext for setting ourselves at the center of reality and worshipping the work of our own hands,” he said.

— Why a calf? “The calf had a twofold meaning in the ancient Near East: on the one hand it represented fruitfulness and abundance, and on the other it represented energy and strength. But above all it is golden, so it is a symbol of wealth, success, power and money. These are the great idols: success, power and money. These are the temptations of all time!”

The golden calf is the symbol of “all the desires that give the illusion of freedom, and instead enslave, because the idol always enslaves,” the pope said.

This enslavement, this turning to an idol, is rooted in the “inability to trust above all in God, to place our safety in Him, to let Him give true depth to our heart’s desires,” Francis said.

— What was God’s biggest challenge? Francis noted how it was easy for God to take the people out of Egypt, but taking Egypt out of the people was, and is, his great work. That is, “removing idolatry from the heart of the people.”

“And God still continues to work to remove it from our hearts. This is God’s great task: removing ‘that Egypt’ that we carry within ourselves, that is the fascination of idolatry,” the pope said.

Weakness is not the misfortune of life

Discovering Jesus enables us to “discover that recognizing our weakness is not the misfortune of human life, but it is the condition for opening up to He Who is truly strong,” Francis said.

“God’s salvation enters through the door of weakness,” he said; “it is because of his own insufficiency that man opens himself to the fatherhood of God. Man’s freedom arises from letting the true God be the only Lord. This allows us to accept our own fragility and reject the idols of our hearts.”

Francis noted how for us Christians, Christ Crucified, weak and stripped of all possessions, reveals the glory of love, “not that of glittering deception.”

“We have been healed precisely by the weakness of a man Who was God, by His wounds. And from our weakness, we can open ourselves up to God’s salvation. Our healing comes from He Who became poor, Who accepted failure, Who took our precariousness to its limit so as to fill it with love and strength,” the pope concluded. “He comes to reveal to us the fatherhood of God; in Christ our fragility is no longer a curse, but a place of encounter with the Father and the source of a new force from above.”

Read more:
Pope: Are you making yourself a human sacrifice to your idols?