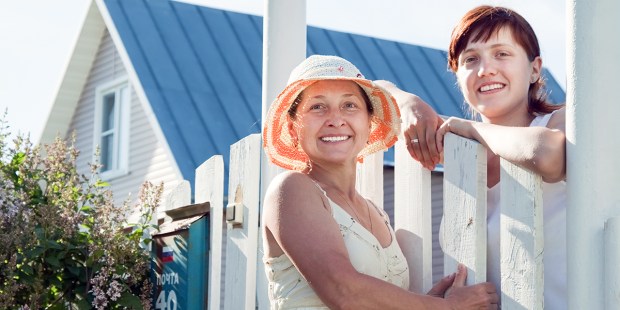 As wonderful — and essential — as community is, we still need boundaries.

Robert Frost was a genius.

Whether writing about the aching tension in our soul between intentionality and efficiency in “Stopping By Woods on a Snowy Evening,” the forlorn neglect of truth and tradition in “The Black Cottage,” or a child-like hope revived by the simplest human act in “The Tuft of Flowers,” Frost was capable of touching the deeply human chord within each one of us. As folksy as some of his poetry may at first seem, his capacity to meditate on the profound with the softest touch was remarkable. Essentially, his poems were parables featuring Everyman — you and me — immersed in transcendent meaning as we go about the business of life.

“Mending Wall” is no different.

This poem is the story of neighbors — two men — who find themselves annually repairing to a fence to, well, repair a fence. Over the passage of time and a long stretch of land, the stones of the rugged fence would fall to one side or the other. And as the men “walk the line” on their respective sides opposite each other, they engage in conversation. They lift and place one stone after another into the breaches. Some boulders are loaves, the others are balls. And no matter the cause — thoughtless hunters or relentless elements — they must be set right. It seems that one (let’s say it is Robert Frost) seems to tease the other about why they even need a fence. “Spring is the mischief in me, and I wonder if I could put a notion in his head …” We have no wandering cattle. My apple trees will not eat the cones off of your pine trees. Frost goes on,

Before I built a wall I’d ask to know
What I was walling in or walling out,
And to whom I was like to give offence.

But his neighbor just smiles and places another boulder in the yawning gap while offering those immortal Frostian words,

So who is right?

Is Frost (if it is indeed him) correct in questioning the need for a fence? Is he right in suggesting that they should break down barriers, foster a deeper sense of openness and community, and challenge the orthodoxy of division and parochialism? Or is his neighbor correct in repairing the fence? Is he justly recognizing the greater community that can be achieved by first respecting a degree of privacy, of clear boundaries, of comfortable ownership that likewise respects ownership by others?

If you read opinions on this question, you will find many championing the former worldview.

But I’m not so sure I agree.

Ask yourself this: when you go to a restaurant, where do you want to sit? In that secluded table in the corner that looks out the window? Or the booth with the 6- and 7-year-old kids blowing straw wrappers over the barrier at you? Do you prefer public restrooms that are singles with locks or multi-use with people coming and going? Does it matter to you if you arrive at the concert and someone is sitting in your ticketed seat? If you bring your kids’ beach toys to the lake or pool, does it make you a little tense that those other kids are taking the toys with them to the other side of the swimming area? Do you ever NOT want to answer the phone or NOT want to answer your door, feeling a bit relieved by the wonders of voicemail and windows that obscure your presence at home?

As wonderful — and essential — as community is, we still need boundaries. As idealistic as we can claim to be about breaking down all barriers and living in seamless utopia with one another, we still like the private room in the hospital and the empty seat next to us on the airplane. And that is okay.

The Body of Christ is community, but it is not at the expense of the dignity of the individual. They exist in concert. One edifies the other. In a world of relentless exteriority — where everyone tweets about their indigestion, posts pictures of their cat’s odd expression and speaks without allowing thought to get in the way — we are starved for interiority. And interiority requires a modicum of quiet, of reserve, of privacy. Interiority requires good fences.

Many monks and nuns, after spending their days in community, return to their cells. The room is sparse, but it is often private. In their darkest hours, most prisoners and patients are not thrust into large general prison populations or medical wards, but in cells or rooms with one or two people. Innumerable office buildings have a conference room or auditorium, but people largely work at their own office, desk or cubicle. Even Jesus Christ chose to go away to a desert place to pray while the crowds clamored after him. And he implored us

But when you pray, go to your inner room, close the door, and pray to your Father in secret. And your Father who sees in secret will repay you.

We all say it: Roll up the window. Close the door. I just need a moment.

Building a fence and maintaining it answers that deep human need for respite, for remove, for interiority. Just as the fence keeps some of the chaos out, it attempts to keep a bit of the peace within. By allowing for a little time and a place to call our own, we find ourselves refreshed and even more ready to engage with others. By affording space for ourselves and God, we are better at allowing space for each other. Quite the paradox.

Yes, I admit, Robert Frost was a genius.