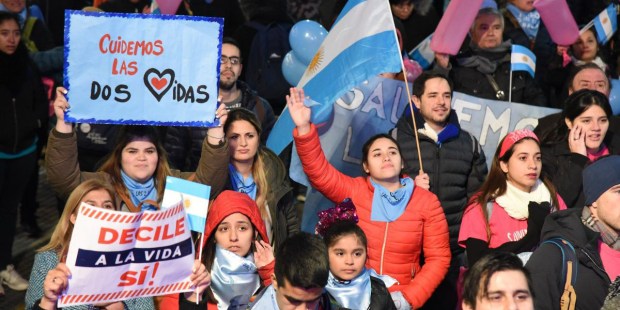 In a victory for the pro-life movement, Argentina’s Senate has defeated a bill that would have legalized abortion up to the 14th week of pregnancy.

After a 15 hour-debate, the Senate voted 38 to 31 against the bill which had narrowly passed the nation’s lower house earlier this year. The bill would have also allowed minors under 16 to get abortions without informing their parents.

The current law in Argentina prohibits abortion, except when the mother’s life or health is determined to be in danger, or in cases of rape.

The defeat of the bill comes in the face of a concerted campaign by abortion supporters in this predominantly Catholic country.

In case you haven’t yet picked up your copy of the @nytimes, we’ve got it here for you. It’s time to say adiós to unsafe abortions in #Argentina. Senators, will you? The world is watching. #AbortoLegalYa 💚 pic.twitter.com/WZWK6dKXYt

President of the pro-life advocacy group, Amerians United for Life, Catherine Glenn Foster, called the bill’s defeat a rejection of the pro-abortion message which used the image of a coat hanger in an attempt to frame the issue as a women’s health issue.

“Life in the womb is human life, and every human being deserves protection. Argentina, like all of South America, is pro-life and will remain so. Argentina has wisely rejected the false message that abortion is necessary to protect women’s health; the truth is that the more pro-mother and pro-life a country is, the better its maternal health record generally is, as the experience of Argentina’s neighbor Chile amply shows,” said Foster.

Despite several attempts over the years to introduce legislation to legalize abortion, this is the first bill to be debated in Parliament. President Mauricio Macri, who is pro-life, insisted on a vote, according to a report in France24.com.

“As a society it presents a peaceful scenario to promote and carry out change,”  Macri wrote.

According to the France24 report, in this, the home of Pope Francis, Catholic and Evangelical churches were instrumental to the bill’s defeat.

“There has been overt pressure from priests. In their Sunday sermons, they have listed the names of politicians, saying, basically, ‘they better vote for this or else’,” said FRANCE 24’s Douglas Herbert.