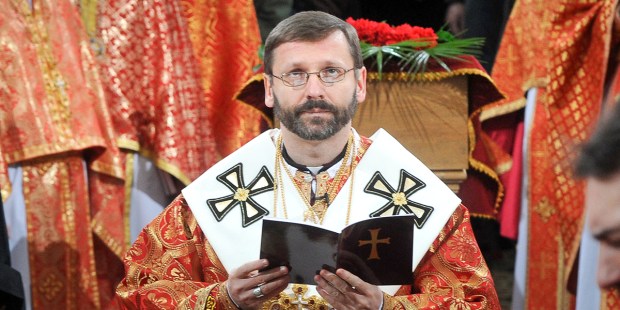 The war in eastern Ukraine is a forgotten war and a conflict in which “fake news” is a key weapon, the head of the Ukrainian Greek Catholic Church said on a visit to the United States this week. But the worldwide Catholic community has a special ability to discern the truth in the situation.

Speaking at the 136th annual convention of the Knights of Columbus, and in an interview with Aleteia, Major Archbishop Sviatoslav Shevchuk of Kyiv-Halych pleaded for support from the Catholic fraternal order and American society in the defense of his nation from Russian aggression.

In spite of a death toll that has exceeded 10,000 and the loss of 8 percent of Ukrainian territory, including the Crimean peninsula, much of the world’s news media have turned their attention to other hotspots. And the widespread use of “disinformation” and economic attacks by Russia makes is a “hybrid war,” he said.

“Thanks to information technologies, modern wars are not limited to specific territories; they are not confined to one continent, without any consequences to those who seem to be far away,” he said during a keynote address at the States Dinner of the Knights of Columbus’s international gathering in Baltimore Tuesday. “Everyone in the Western world today experiences the consequences of this information war, which targets truth by disseminating ‘fake news’ and molding public opinion according to dishonest goals. Unfortunately, not even your country or other developed countries in Western Europe have been spared from these attacks. Please remember: it is not only our war — it is the war for humanity.”

U.S. officials have determined that Russian agents tried to influence voters during the 2016 presidential election by setting up fake social media accounts that would fan divisiveness.

In an hour-long interview in Baltimore Wednesday, Archbishop Shevchuk argued that the war in eastern Ukraine is not merely a conflict between two nations.

“This is a conflict of two different visions of the future, of two different national projects for the development of our societies,” he said. “The project of Ukraine, which started 26 years ago, is a project to move forward toward European standards of democracy, to be an open society, where each citizen can realize his own personal gifts in order to cooperate for the common good of his country.

“The second project, which is projected from Russia, is the restoration of the Soviet Union,” he continued. “President [Vladimir V.] Putin several times pointed to this as a final goal of his presidency, to restore Soviet pride. For us, practically, it means to choose between going forward or coming back, develop our society toward the international democratic standards or deny our freedom.”

He said that an organization formed in the wake of Ukrainian independence, the Council of Churches and Religious Organizations of Ukraine, which includes Orthodox, Catholic, Protestant, Muslims and Jews, supported the pro-European choice because “we felt it was the only condition to have religious freedom in Ukraine. [Accepting] the Russian project meant for us to come back to the catacombs,” a reference to the illegal status of the Church under the Soviet Union.

The major archbishop, who heads the largest Eastern Catholic Church in communion with Rome, added that the war in Ukraine is “a fight for international security.” He explained that the 1994 Budapest Memorandum on Security Assurances guaranteed security for Ukraine and several other former Soviet countries in exchange for their agreement to give up their nuclear weapons The Russian Federation was a signatory to the Memorandum.

“After the aggression of Russia, which signed that memorandum, who will be able in today’s world to deny the use or redevelopment of nuclear weapons, believing that international law will defend the serenity and integrity of its country?” Archbishop Shevchuk asked. “So it is why we appeal to the United Nations and the citizens of USA that that which is happening right now in Ukraine is affecting also you. Because that war is called a hybrid war, the war of information, of fake news, and today very often each of you who is reading some fake news which is presenting the situation in Ukraine, each of you is becoming a victim of that propaganda. So it is why the truth about Ukraine, about a continuing war in Ukraine, is so important.”

It might be a forgotten war and a hybrid war, Shevchuk said, but it is not, as some have characterized it, a “frozen conflict.”

“Each day, somebody is killed on the front line,” he said. “The conflict in Ukraine is not frozen, it is hot in Ukraine right now.”

In his keynote address at the Knights convention, he said the environmental damage being done in the conflict will rival the effects of the Chernobyl nuclear accident in 1986.

The situation requires an “international response and solidarity,” he said. “I’m convinced that there is no military solution for the crisis in Ukraine. We cannot only with weapons withstand so powerful a country as Russia.”

He said that the international community needs to “be firm in defending human dignity, international law, serenity of country, of Ukrainian country, [and] reaffirm the global system of international security.”

But if the values of human life are neglected, if the economy prevails over human dignity, it means the end of democracy,” he warned. “And if it happens in Ukraine tomorrow, it will happen with you [next].”

As for dealing with a disinformation campaign, he said that Christians have a “special ability to discern truth, because that ability is a special grace, a special work of the Holy Spirit.

“I think the duty of Christians in today’s world is to look outward and to be witnesses of the truth,” the archbishop said. “The Council of Churches and Religious Organizations, he said, tries to stay out of politics, a move that “helps us not to be affected by propaganda from one side or another.

“But also we feel ourselves to be representatives not of politicians, not of government, but a simple people,” he said. “So we give a voice to the voiceless, and we speak out on behalf of the simple parishioners, the simple faithful of our communities. We are in touch with reality not through only the mediation of social media, but we are in touch with the life and stories of concrete people. And this is how we can understand what is going on. And it is how we as Churches then can share our reflections with our brother Orthodox, Protestants, Muslims, Jews, and can make our statements. It is why we can in one voice and one heart convey our message to the international society.”