At least 22 killed in bridge collapse near Genoa, Italy 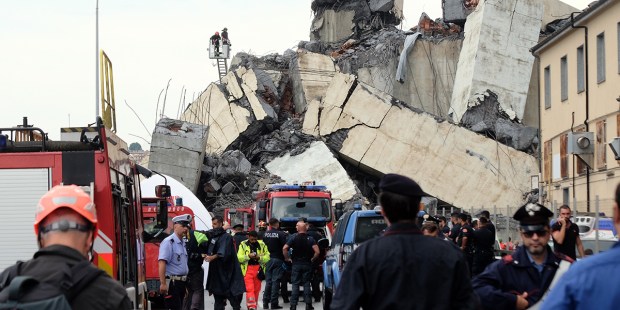 Bad weather is being suspected as the cause of a bridge collapse near Genoa, Italy, which killed nearly at least 22 people Tuesday.

The death toll could go higher. Italian Transport Minister Danilo Toninelli said it was likely to be “an immense tragedy,” according to the BBC.

Cars and trucks plummeted almost 300 feet, along with a 262-foot section of the bridge, onto rail tracks below. Nearby buildings also were damaged. The bridge is in a part of the city that is densely inhabited, according to La Repubblica newspaper.

Video footage appears to show one of the towers holding up the suspension bridge collapsing in stormy weather, the BBC said. Police linked the disaster to what they called a violent cloudburst.

“It was just after 11:30 when we saw lightning strike the bridge,” eyewitness Pietro M all’Asa was quoted as saying by Italy’s Ansa news agency. “And we saw the bridge going down.”

The Morandi Bridge, built in the 1960s, stands on the A10 toll motorway, which serves the Italian Riviera and southern coast of France. Work to shore up the foundation of the bridge was being carried out at the time of the collapse but the structure was constantly monitored, Reuters reported, quoting a highway operator.