There’s a common denominator in the beliefs Catholics struggle with 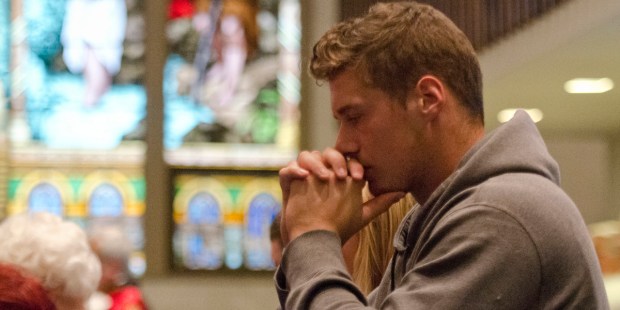 It’s probably not so much a question of what we believe, but what we’re willing to do … and that’s a pity, because happiness is tied to self-sacrifice.

Have you ever noticed that there is a simple predictor of just which beliefs and practices we as Catholics will embrace?

To explain what I mean, let us first consider that there are countless ways in which what we say and do reflects how faith translates into our lives. For starters, we will begin with the belief in God. Polls indicate that 91 percent of Catholics are either absolutely or fairly certain that God exists. Although believing in God certainly requires a framework of thought that acknowledges a “higher power” and a limited scope of human control, the belief itself doesn’t necessarily require much self-sacrifice on a daily basis.

But let’s look at how Catholics view and embrace matrimony. Even though the number of self-identified Catholics in the U.S. has remained rather stable over the past few decades (partially due to immigration trends), the number of Catholics getting married in this country has declined by almost two-thirds, even more than the national trend.

Committing to marriage is not only a lifelong commitment to self-sacrifice, but is also a pledge of self-giving no matter what the circumstances, for richer or poorer, in sickness and health… But as human beings are naturally driven to be united with each other, and in one family, and as society continues to sanction marriages in many ways (despite obvious threats and support of other practices), many still will find themselves tying the knot.

Let’s continue along the lines of self-sacrifice, and consider Sunday Mass. Some of us are blessed to experience the Mass in a meaningful and joyful way, even if our kids can render the minutes of this “timeless celebration” as an exercise in emotional control and parenting Jui Jitsu. But for too many, the Mass is not a joy at all, and is simply an obligation of sacrifice. Attendance at Mass appears to reflect this perception. Around 81 million U.S. citizens consider themselves Catholic.  But less than 31 percent  attend Mass regularly, and many of them are older women. Only 42 percent are part of a parish, and the numbers of youth receiving the sacraments continues to drop.

How about the self-sacrifice required by the sacrament of confession. Recent estimates indicate that only 2 percent of Catholics go to confession regularly, and more than 75 percent go less frequently than once a year.

Yet similar to the rates of confession are the rates of adherence to Catholic beliefs on contraception and family planning. For all the reasons that Catholics may spurn the teachings of Humane Vitae, one of the obvious ones is that accepting these teachings means committing oneself to a notable level (and duration) of self-sacrifice.

It seems no surprise to say that Catholicism has always had much to do with self-sacrifice, and the willingness to tolerate discomforts and delay desires for what is much better to come.

Science has already provided plenty of evidence that this is one of the most central and most malleable keys to a happy, successful, healthy life.  Governments know that the fewer the citizens who embrace this notion of the common good, the more challenging budgets and legislation become.

But as Catholics parents, and Catholic people ourselves, do we really understand that it one of most central ways our free will can be developed and used so we can come to love and embrace the faith we profess? Next time we teach our kids the value of doing chores for the good of the family (despite their moaning), we might consider it as one of the most Catholic things we did that day.

Read more:
The dishes CAN’T wait: Why chores are important for everyone in the family