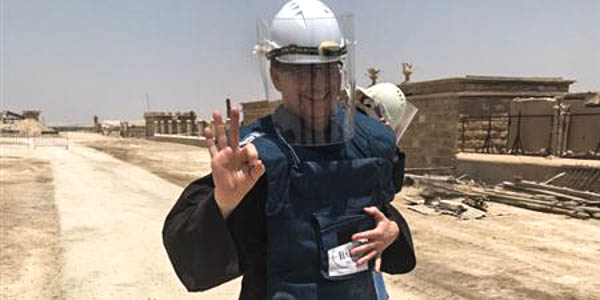 The monastery of the Franciscan missionaries serving the Holy Land was abruptly shut down in 1968 after the outbreak of war between Israel and Palestine.

For centuries, the monastery of the Franciscan missionaries serving the Holy Land, located at Qasr el Yahud, near the spot of the Jordan river where Jesus was baptized, stood as one of the world’s most important Christian pilgrimage sites. Indeed, the first Franciscan pilgrimage to the site was recorded in 1641 and pilgrims have flocked to the area every year since then.

But the outbreak of war between Israel and Jordan in 1967 quickly turned the area outside the monastery in a combat zone ridden with mines—the local minefield covered an estimated 55 hectares of land—and led to the sudden abandonment of the monastery in January of 1968.

One of the most important Christian pilgrimage sites in the Holy Land is once again accessible to visitors after 50 years.

For years, no one could access the monastery. It was only in 2000 that the visit of of John Paul II to the Holy Land spurred Israeli authorities to open a small route to access to the structure. But visiting the monastery was still a risky activity as its surroundings were still plagued with unexploded landmines. Now, thanks to the work of the Halo Trust, an organization that works  to remove mines from former war zones in Christian areas, visitors can once again visit one of the key sites of Christian pilgrimage in the Holy Land.

Halo Trust operators checked the monastery and its surroundings for landmines.

This past July, Halo Trust operators worked to clear the main road to the church as well as its interior and exterior perimeter from mines. They did not find any suspicious materials, so they declared the sit and its surrounding “safe.”

Some of the friars who could finally re-enter the monastery found it in a state that suggests it had been evacuated in a hurry. “It seems that the friars left in a hurry, because even the register of the pilgrims’ Masses had been left on the table of the refectory with the pencil inside,” Brother Sergey Loktionov said.

Judging from the way objects were left behind, it seems that Franciscan friars had to leave the monastery in a hurry in 1968.

It is expected that thanks to the Halo Trust’s work, all areas belonging to the eight Christian churches—Catholic, Greek Orthodox, Armenian, Coptic, Ethiopian, Romanian, Syriac and Russian—should be free of mines and fully operational by next Epiphany, when many pilgrims flock to the Jordan River to celebrate Jesus’ baptism.