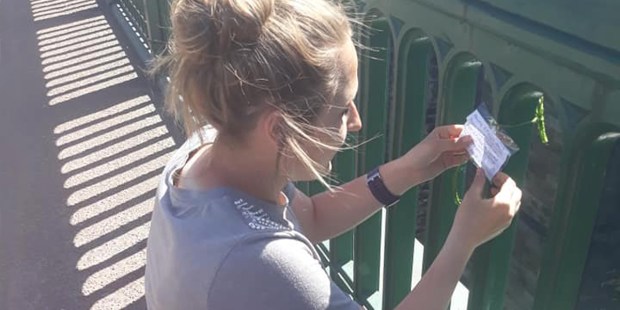 An 18-year-old student from Northumbria, England, is being honored by local police for her efforts in reaching out to those in a mental health crisis that have helped save six lives already.

To help prevent suicide attempts, Paige Hunter, a student at East Durham College, tied over 40 messages of encouragement and hope to a bridge in her area.

The colorful messages feature notes such as “You’re not alone” and “Even though things are difficult, your life matters; you’re a shining light in a dark world, so just hold on.” The messages also displayed the number to call Samaritans, a UK-based charity that offers a listening service for anyone in distress.

Northumbria Police Chief Superintendent Sarah Pitt said that Hunter has found “an innovative way to reach out to those in a dark place.” She added, “Paige has shown an incredible understanding of vulnerable people in need of support. She should be very proud of herself.”

The police have awarded Hunter a commendation certificate for her work, and many others are reaching out to Hunter to express how inspired they’ve been by her story. Her compassion has impacted six lives and probably many more to come; efforts that take only one day can add years to another’s life.

Read more:
Put these numbers in your phone to help prevent suicide