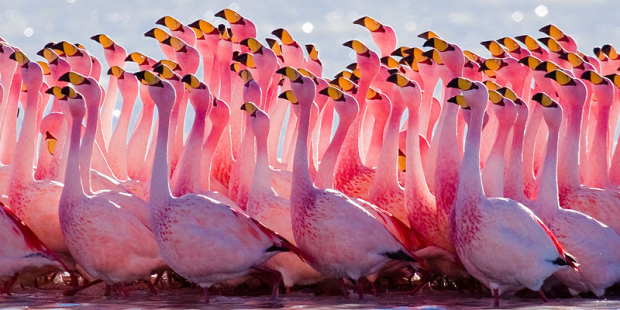 Conservationists say this spells hope for the endangered Andean flamingo.

The UK’s record-breaking heat wave has many cursing the weather and searching for relief. Rather than focus on the lamentable beer shortage, however, note that this intensely hot summer has created a rare opportunity to marvel at the persistence of God’s creation.

The New York Times reports that the recent hot spell has prompted the endangered Andean flamingo to lay eggs for the first time in 15 years. This is no small feat for this group of birds, which the folks at the Wildfowl and Wetlands Trust (WWT) in Slimbridge, England, describe as “fickle breeders.” The flamingos at the WWT have not laid eggs since similar temperatures were seen in 2003 and they had not successfully produced offspring since 1999.

“We’ve been encouraging the flock by helping them to build nests,” Mark Roberts, the aviculture manager at the reserve said, “but there’s no doubt that the recent heat has had the desired effect.”

In total, nine eggs were laid by only six birds. Unfortunately, all of the eggs were found to be infertile, but the team of caretakers have not lost hope that continuing heat may lead to fertile eggs.

In an effort to encourage mating, the WWT team has taken “a handful” of eggs from Chilean flamingos, who live side by side with their Andean cousins, and planted them among the Andean flamingos. On their website, the WWT crew notes: “Chilean flamingos are relatively similar to the Andean. They live side-by-side in the wild but survive on different diets.”

The Chilean eggs have already hatched and the Andean flamingos are reportedly taking care of the chicks. The WWT staff hopes that by raising chicks, the Andean flamingos will be reminded of the joys of parenthood and might just start an effort to get themselves off the endangered species list.

The New York Times reminds us that both of these species are considered “endangered”:

The Chilean birds are described as “near threatened” because of egg-harvesting, hunting, disturbance and the loss of habitat, while the Andean ones are called “vulnerable” because of past exploitation that shrank their population.