Yes, the Church is absolutely holy. Here’s why 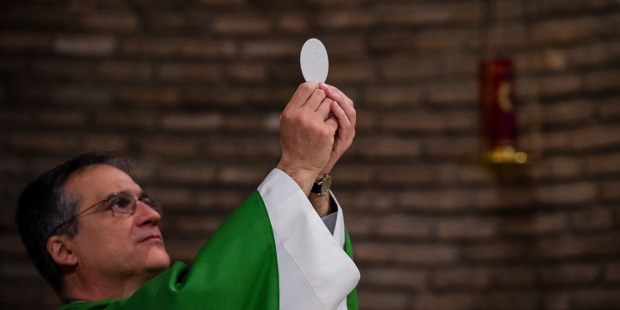 From its origins to its fruits, from its purpose to the means it uses for this purpose, yes, the Church is holy, despite the evil that is plaguing it.

As more priest scandals hit the headlines, the words of the creed at Mass can start to sound hollow: “I believe in one holy catholic and apostolic Church.”

How can we look at a Catholic Church that has had such bad men in leadership positions and call it “holy”? The readings for this Sunday, the 20th Sunday in Ordinary Time Year B, explain how: The Church is holy in its origin, its purpose, its means and its fruits.

First, the Church is holy in its origin.

In the Bread of Life Discourse, continued in Sunday’s Gospel, Jesus explains his mission in startling terms: “Amen, amen, I say to you, unless you eat the flesh of the Son of Man and drink his blood, you do not have life within you.”

Jesus came from Bethlehem; the name of the town means “house of bread.” He changed water into wine as his first miracle and multiplied loaves of bread as the only miracle recounted in every Gospel. He announced the Eucharist as the ultimate test of his disciples, after which many left him and one decided to betray him. He instituted the Eucharist as his last act before his Passion and death. His side poured out blood on the Cross, and after he rose from the dead he met his disciples on the road, broke bread with them and then disappeared, leaving only his real presence in the Eucharist to stay with them.

This is the first reason the Church is holy: because it began from the heart of Jesus Christ reaching out to give the world his body and blood.

Second, the Church is holy in its purpose.

“Whoever eats my flesh and drinks my blood has eternal life, and I will raise him on the last day,” says Jesus.

The Church exists to accomplish what the Second Reading tells the Ephesians: “Watch carefully how you live,” it says, “because the days are evil. Do not continue in ignorance … but be filled with the Spirit.”

The Church also exists to do what the Psalm says: “When the poor one called out, the Lord heard, and from all his distress he saved him.”

The whole purpose of the Church is to reform sinners and heal sin’s victims.

For every predator who has used the Church for sinful purposes, there are thousands of spiritual healers who Christ uses to reach us through the Church to forgive us, restore us and refresh us.

Third, the Church is holy in the means she uses.

The first reading presents a beautiful vision of the Church and the seven gifts of the Holy Spirit, which are given through the seven sacraments.

“Wisdom has built her house, she has set up her seven columns; she has dressed her meat, mixed her wine, yes, she has spread her table,” Proverbs says. “Let whoever is simple turn in here; To the one who lacks understanding, she says, Come, eat of my food, and drink of the wine I have mixed!”

The ultimate feast laid out by the Church is the Eucharist, where we receive Jesus Christ himself in the ultimate sacrament, which has the power to change us. “For my flesh is true food, and my blood is true drink,” Jesus says.

Read more:
It’s not enough to “like” the saints, says Pope Francis

Fourth, the Church is holy in its fruits.

The major “fruits” of the Church are its saints — canonized or not.

The centerpiece of the church’s Year of the Eucharist in 2004-2005 was the canonization of several saints who spread Eucharistic adoration in Poland, Chile, Sicily and Italy. But every saint is a Eucharistic saint — from St. Paul, who stressed the need to be worthy to receive the “body and blood,” to Mother Teresa, who relied on the Eucharist to give her the strength to serve the poorest of the poor.

The Church is holy in its origin, its purpose, its means and its fruits — and it can be holy in each of our lives for the same four reasons, starting this Sunday in the Communion line.

Read more:
Prepare for Communion with these beautiful (short) prayers from the saints