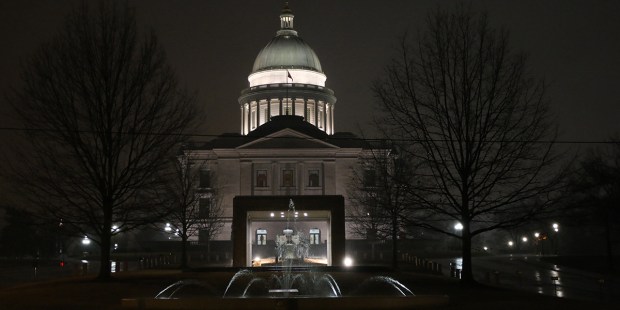 Outside the Arkansas state capitol, it’s starting to look a little like a replay of the famous contest between Elijah and the prophets of Baal.

Last year, following approval in 2015 by the state legislature, a Ten Commandments monument was installed on capitol grounds. In May, the American Civil Liberties Union sued on behalf of four Arkansas women to remove the monument on First Amendment grounds.

On Thursday, protestors took it a step further. Members and supporters of the Salem, Massachusetts-based Satanic Temple wheeled in a statue of Baphomet, the winged, goat-headed creature venerated by Satanists.

Lucien Greaves, co-founder of the Satanic Temple, told the Huffington Post that the move was for “all people who hold sacred the founding Constitutional principles of religious freedom and free expression.”

“What we are asking for is only that the public square … remain an area where free speech, religious liberty and equality under the law be respected by the holders of public office who swore to uphold those values,” Greaves told a crowd at the rally.

But this is in the Bible Belt, not freewheeling Massachusetts. Anticipating the demonstration, opponents of the Satanic Temple on Wednesday held signs saying “Blasphemy is not free speech,” “Satan has NO rights,” and “Honk for Jesus.”

It will be a “very cold day in hell” before a statue of Baphomet will be installed in Little Rock, said Arkansas Republican and state Sen. Jason Rapert, a minister and lead sponsor of the law allowing the Ten Commandments monument.

Members of the Satanic Temple insist they don’t worship any deity but are humanists who believe in science. According to its website, the Satanic Temple’s mission is to “encourage benevolence and empathy among all people, reject tyrannical authority [and] advocate practical common sense and justice.”

They are also active in the public policy sphere, challenging abortion laws in Ohio and Missouri on the grounds that they were legislated on religious dogma.