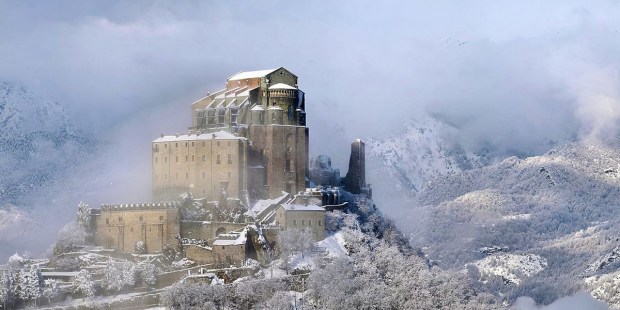 Hills and mountains are charged with a powerful religious symbolism. Mountaintops are closer to the sky, and therefore to God.

From Sinai to Zion, mountains and hills are often the backdrop of holy events in both the Old and New Testament. Indeed, it is estimated that “mountains” are mentioned at least 500 times in Scripture. That’s partly because many events written about in the Bible occur in mountainous places. But it’s also because hills and mountains are charged with a powerful religious symbolism: mountaintops are closer to the sky, and therefore to God. That may explain why, since the birth of Christianity, churches have been built on top of steep cliffs, rocky mountains or gentle hilltops. Here are five spectacular churches that were erected on top of mountains:

Built on top of Mount Pirchiriano, in northern Italy, St. Michael’s Abbey owes its fame to Italian writer Umberto Eco, who picked it as the setting of his award-winning mystery novel The Name of the Rose (1980). A local legend has it that the mountaintop abbey was built by a hermit, St. John Vincent, to honor Michael, the archangel who warred with Lucifer. According the first written evidence on the abbey, authored by a monk named William, it was built during the late 10th century—its Byzantine influence is seen in the columns and arches of its crypt. The abbey’s Romanesque facade, towering above the valley, leads to a steep staircase named “Stairway of the Dead” topped by the an imposing 12th-century marble gateway known as “Zodiac’s Door.” During the 11th century the building was expanded by Benedictine monks who annexed a small monastery and some guest rooms for pilgrims traveling along the via Francigena.

Also known as “Chapel-in-the-Rocks” and “Crag Church,” the Felsenkirche church looks like it was unearthed from the rocky mountains near the West German town of Idar-Oberstein. According to a local legend, it was built by a local prince, Wyrich, in atonement for having killed his brother by pushing him off their cliff-topping castle. No historical record mentions the event, but what is sure is that a natural cave formed out of a spring that had previously served as a defense fortification and as a shelter for nearby villagers became the site of the church around 1484. Today, its unique location and its works of art, including an agate crucifix, a Gothic-style stone baptismal font and a functioning organ dating to 1756, attract an estimated 100,000 visitors per year who climb the 230-step stairway to visit it.

Built in 1936, the “Chapel on the Rock,” officially known as St. Catherine of Siena Chapel, is one of the most important landmarks of Colorado. Located just outside of Rocky Mountain National Park near Allenspark, it owes its construction to Monsignor Joseph Bosetti who in 1916 came upon the cliff while trying to locate the impact site of a meteorite. Upon seeing the rock formation, Bosetti was reminded of Matthew 16:18, which reads: “Upon this rock I’ll build my church, and the gates of hell shall not prevail against it.” He spent the following 20 years trying to turn his vision into reality, thanks to land donated by local landowners Mr. and Mrs. Malo and to the design of Denver architect Jacques Benedict. In 1993 Pope John Paul II visited the chapel as part of his trip to Denver to attend World Youth Day and spent some time hiking in the nearby trails of Camp St. Malo, which were later named John Paul II Trail in his honor.

If there was a prize for the most picturesque pinnacle church, that would probably go to Saint Michel d’Aiguilhe, built in 969 on top of a 279-feet volcanic plug by a local Bishop named Godescalc who wanted to celebrate his return from a pilgrimage to the shrine of St. James in Santiago de Compostela, Spain. That’s why part of the chapel architecture is reminiscent of holy buildings from Spain, especially the stone work of Cordoba Cathedral. Today, the chapel serves as a starting point for that same pilgrimage and many visitors get their walking sticks blessed in the clifftop shrine before starting their walk. The top of the cliff measures just 187 feet in diameter—hence the name “Aiguilhe” which means “needle”—and can only be accessed by a lateral staircase made of 268 steps.

Built on top of a rocky hill at the confluence of the Mtkvari and Aragvi rivers in Georgia, eastern Europe, Jvari Monastery is one the finest examples of Georgian architecture and a UNESCO World Heritage site. According to a local tradition, its site was the place where St. Nino, a female evangelist from the 4th century, built a wooden cross on a previous pagan temple that soon started to attract pilgrims from all parts of the then Kingdom of Georgian Iberia. No historical account can proof the authenticity of that tale, but what’s sure is that the current building dates to approximately 590 – 605 when King Erismtavari Stepanoz I ruled the kingdom. Today, the Jvari complex stands as one of the earlier examples of “four-apsed church with four niches,” a technique also known as “tetraconch” that became a distinctive feature of Georgian architecture and that inspired the style of many other churches in the region.