This Jesuit could have left Syria. Instead he died a martyr 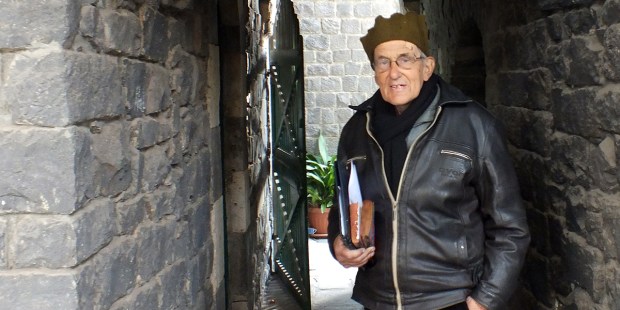 “From the very beginning he believed that people can live together, despite their differing views.”

He died like a martyr, because he was a man of love who believed that Christians and Muslims can peacefully live together in Syria. He was a Dutch Jesuit who remained in the besieged town of Homs to look after a couple of dozen Christians

“The most important thing is to keep up hope and not to despair. Only then can I help others! If I leave my home, nothing will stay of it. Besides, there are still Christians here. About 28 people. I do not want to leave them,” said the 75-year-old Jesuit priest, Fr. Frans van der Lugt.

He speaks of this in one of the videos he made, where he can be seen walking among the rubble down the streets of Homs, wearing his worn-out gray sweater.

In other videos, in the background you can clearly hear the sound of bombs exploding and gun shots. “I will stay here even if there are no more Christians, because I came here for Syria, for all Syrians. I am here to serve them and this country, which I have loved so dearly,” he says.

Many found these words incomprehensible: Here we have a European who could easily leave during the siege of Homs, yet rejects this possibility in order to stay with those he was called to serve. He wants to be there with them till the end, even when there are only 28 Christians left.

Shot down in the entrance to the monastery

“Remember that he was sent to Syria as a Jesuit. He had also come as a young boy. He spent about 50 years there. He spoke fluent Arabic,” says Lilian Nazha, who is associated with the Jesuit parish in Homs. She met Fr. Frans as a 6-year-old girl. He organized activities for children in the monastery at the Jesuit parish. She calls him “my father,” and although she is all smiles, as soon as she starts talking about how he was murdered, her eyes fill with tears.

During the siege of Homs, he decided to stay in the city and look after the few Christians from his neighborhood. In practice, he took care of all those who were there: Christians and Muslims.

They had almost nothing to eat. “In the evening, they made soup from leaves that were left on trees,” says Lilian.

A month before the liberation, on April 7, 2014, a man with a masked face knocked on the door of the monastery. “You must leave the church!” he demanded of Father Frans. “No, I will not leave, this is my home and I will not leave it,” answered the Jesuit. He was shot down straight away.

He was buried in the besieged town. A second funeral, without the body, was held outsde the walls; many people came to thank him for being the bridge that connected people.

A saint of a man

He came to Homs from Damascus. Before that he also lived in Aleppo. He was instrumental for building the al-Ard center in a village, with a school and a house for about 45 people with disabilities, including Down syndrome.

Al-Ard gathered people of different faiths who had lost their homes. Young people came there. Disabled people helped with the tasks of the home. They proudly brought fruit and vegetables to the kitchen, boasting about their contribution to the growing of the produce. People cooked food together. There was a sense of extraordinary community.

This was not the only project of Father Frans. He was a psychotherapist by education and he was always teaching the faithful something, often during mountain treks.

At the age of 70, he regularly organized 3- to 10-day trips and summer camps. Those who knew him say that he had it in his blood. Christians, Muslims and non-believers walked side by side.

People, men and women, rich and poor, with different political views participated. This was the time to talk and build relationships. He knew that sharing the effort of a hard climb in the mountains and the need to rely on each other during the trek made people start seeing each other as brothers.

From the very beginning he believed that people can live together, despite their differing views. He would also constantly remind us that we are all brothers and should love one another, Lilian recalls. He was a holy man, indeed! Many thought so. He had pure goodness in him. People sensed that he was like Jesus. Everyone could come to him to talk. He did not create any distance. When I talked with him, I felt that I was unique in his eyes, but absolutely everyone who spoke to him had the same feeling. Some Muslims, too, called him “holy.”

On the first anniversary of Fr. Frans’ death, his confrere and friend said during Holy Mass that he was sure that Fr. Frans immediately forgave his killer. He added that if only this man had stopped to look in his eyes, full of goodness and peace, he would not have shot the priest.

Read more:
Homes in Homs: A few more Syrian families get a roof over their heads again