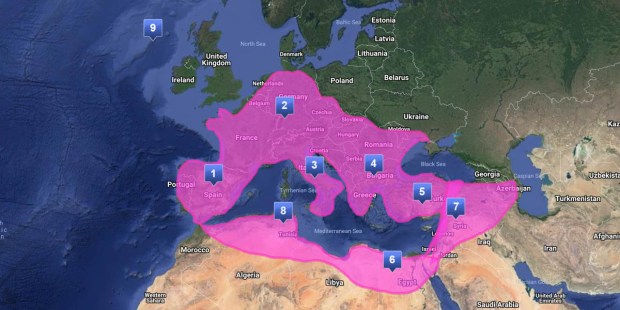 This map is a great educational tool for students.

Rome is one of the oldest cities in the world. Two thousand years ago the Roman Empire grew to become the largest on Earth. Although Roman mythology dates the founding of the city of Rome at around 750 BC, archaeological evidence traces its history much further back.

Now, the folks at Scribble Maps have created an interactive map which allows the exploration of the ancient city of Rome. The map gives a view of the placement of structures and it is easy to tell that Ancient Rome existed in a time well before city planners brought order to gridlocked streets.

As you hover over each building, an explanation pops up with the name of the structure, as well as its history and uses. Some of the buildings on the map include the Temple of Peace, the Baths of Nero, the Theatre of Pompeii, and the Mausoleum of Hadrian.

Heritage Daily notes that the population of Ancient Rome came together from a mix of Latins, Etruscans, and Sabines and expanded to become one of the largest empires in the ancient world, though still ruled from the city, with an estimated 50 to 90 million inhabitants (roughly 20 percent of the world’s population) and covering 5.0 million square kilometres at its height in AD 117.

Through non-stop conquests, Rome grew to encompass the entirety of the shores of the Mediterranean, as well as much of Africa, the Middle East and all the way up to England.

The interactive map by Scribble Maps is a great tool for anyone studying ancient Rome. Not only does it provide valuable information on the city’s structures, it gives us a look at how they placed their buildings, how foot and cart traffic may have flowed, and it offers insight into Roman life, since the majority of the buildings were temples, bath houses and theaters.

You can see a full sized map here.