Is it time to change the way you organize your life? 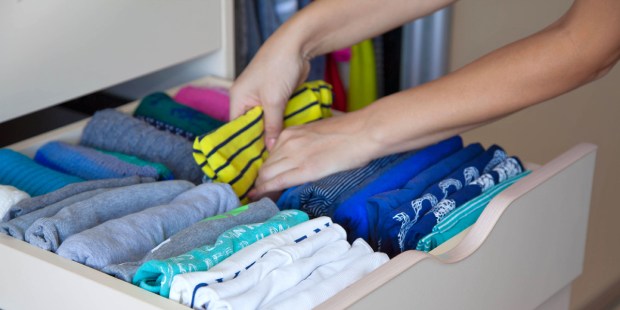 Those tips from master organizers might be working against you. Here’s how to prioritize what’s most important.

It’s no secret that I’m terrible at organizing, whether it’s organizing my items or organizing my time. Meticulous, detail-oriented thinking is just not my strong suit.

In fact, when I do organize things I often realize after the fact that I’ve done it in a way that will make life harder, not easier. Last weekend I re-organized my sons’ dresser drawers, stacking their outfits neatly together so that when they wanted something, the pants that matched the shirts would be in the same place.

This weekend, as I was having them put their folded laundry away, I realized how colossally stupid that move was. I had handed them stacks of shorts and shirts, and they had no idea how to match outfits or put them in the correct drawers. In trying to save myself the 20 seconds of helping them choose which shorts to pair with which shirt, I had created an unnecessary amount of work that had to be undone and then re-done.

A recent article at Ladders made me realize how important it is to get organized by first figuring out how to do it — starting with which things to prioritize.

It’s hard to keep everything organized and tidy. And maybe you don’t want to have an organized life. But moving forward will require far less energy if you remove the excessive baggage and tension. Everything in your life is energy. If you’re carrying too much — physical or emotional — your progress will be hampered.

In his book, The 7 Habits of Highly Effective People, Stephen Covey explains that some things are important, and some things are urgent. Most people spend their life prioritizing urgent and “shallow” activity (e.g., answering emails, putting out proverbial fires, and just day-to-day stuff). Very few people have organized their lives to prioritize almost exclusively important and “deep” activity (e.g., learning, health, relationships, travel, and goals).

Here’s the thing about what I was trying to accomplish with my wizard clothes-organizing: I was trying to prevent frustrating moments of trying to teach my sons how to match clothing, which inevitably happens when we’re running late and trying to get out the door. Every parent knows what I’m talking about and understands how frustrating that can be.

But while having pre-matched clothes for my boys might save me minutes of time in the short term, in the long term it will actually eat up more of my time because by prioritizing the process of doing it for them, I skip the process of teaching them to do it for themselves. So instead of being able to match clothes for themselves by the time they’re halfway through elementary school, they’ll still be relying on me to match their clothes for much longer than they would otherwise.

But the crucial thing I would be skipping is the moments of connection themselves — frustrating as they might be, those little daily moments of teaching and interaction are the foundation of my relationship with my kids. I shouldn’t prioritize my time away from the most important people in my life.

Instead, I decided to find a way to organize our morning routine to lift the stress from those small moments so that the connection doesn’t get eclipsed by frustration. The only practical solution for us was to choose clothes the night before, when we aren’t rushing to get out the door. This makes those moments so much sweeter, because I can take the time to teach them about matching clothes rather than yanking clothes out of the drawers and rapid-firing a response about how camo shorts don’t match camo shirts unless you’re in the army while I sprint to get the eggs off the stove.

It’s such an effective solution that I’m going back through all my routines and re-evaluating them, figuring out which ones take time from important people and important goals, and which ones create more time to give to things that are more important. I don’t expect to magically transform into a highly organized person — but I do expect to understand a lot more about exactly what organizing is, and how to go about it.

Read more:
How to teach your child home organization skills