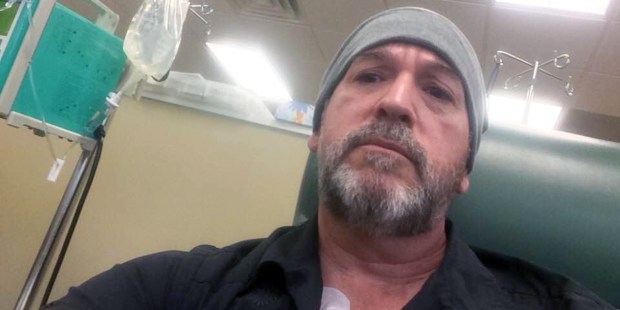 In an extraordinary act of kindness, local teachers donate 100 days of sick leave so Robert Goodman can focus on healing.

This summer, while Robert Goodman was enduring grueling rounds of chemotherapy to combat his colon cancer, he realized that he’d be fast running out of sick leave from his job as a history teacher. So not only did the veteran teacher, who’s worked at Palm Beach Gardens High School for 23 years, have to face fighting for his life, he had to worry about being there for his students, and having an income.

On the day Goodman was supposed to return to work, this August 6, he was still coping with the side effects of his treatment: nausea, chills, sleepless nights, a weakened immune system — that would be put at risk surrounded by all his pupils — as well as the psychological effects battling the disease can have. As he shared with the BBC: “It truly frightened me,” adding, “Chemo really messes with you. I was wondering how I could handle getting up at 5 a.m. every day.”

So during a chemo session in July, the 56-year-old took a selfie and shared it with a cry for help to other educators in the Florida state — whose school system allows for teachers to exchange, or donate, sick leave with one another. The Facebook post stated “… If I can get 20 more sick days from any teacher or district employee volunteers, that would allow me to take more time to recover in battle through chemo for 12 weeks, which should be enough time for me to complete at least the treatment.”

The response was overwhelming. Within four days the whole teaching community rallied around him, including university professors, teachers, lunchroom workers, donating 100 days of sick leave that would allow him to take a much-needed semester off to continue his treatment and take time to recuperate. As Goodman shared with CNN: “I felt guilty because I knew there were people who had it much worse than me” who had offered their precious days.

Yet the Floridian was not surprised by this help. “Teachers always give — it’s a profession of giving.” However, he is quick to appreciate that these donated days, which could also have been banked for retirement, were a source of love. “When hundreds of people shower you with their love it’s a life-changing experience.”

And now that Goodman won’t have to worry about the logistics of being off to work while juggling the nasty side-effects of his treatments, he can put all his energy into fighting his deadly tumor, which sadly was only caught when it was at a late stage 3. As a result, he no longer has the strength in his lungs to pursue one of his favorite passions — singing. However, the first thing he has planned on his return to work in January is a musical thank-you event for all those who helped him in his time of need.

Read more:
Pray this powerful prayer for the healing of cancer