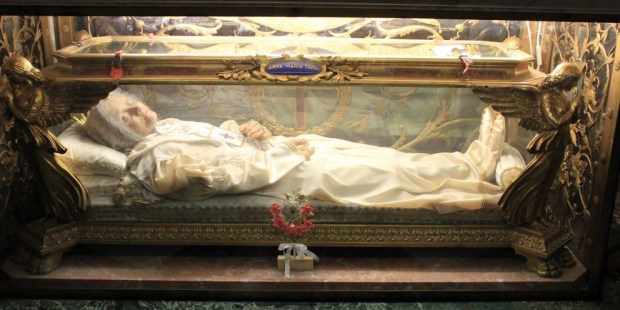 Anna Maria Taigi believed that marriage was one of the greatest missions from heaven.

Anna Maria Taigi lived most of her life as an “ordinary” housewife and mother to seven children. She is proof that an intimate life of the soul with God is certainly not only for those who have taken vows, but is truly for all people who reach out to Him and do their best to follow Him.

She was born on May 29, 1769, in Siena, Italy. Her father was a pharmacist but had lost his position and his money and was forced to take a job elsewhere. He decided to move the family to Rome where he found a job as a household servant. Anna began attending a school run by the Filippini Sisters and was there from 1774 through 1776.

When Anna completed her education, she took whatever work she could to help her parents. Her primary job became that of a housemaid. She received her Confirmation in the Basilica of St. John Lateran in 1780 and her First Holy Communion in her parish church in 1782.

In 1789, Anna married a man from Milan, Domenico Taigi, a butler. The couple went on to have seven children. Three of the children died when they were quite young. Little Pietro lived to be two years and one month old while Luigi died at a year and a half old.  Margherita died at birth, and of the four surviving children Camillo lived to be 42 and Alessandro lived to be 35. Maria remained unmarried and Sofia, who had been widowed, was left to raise six children.

Domenico, although a man of high moral standards, had an explosive temper. He was never physically abusive to Anna, but he could be a screaming tyrant at times who brought intense pressure to the family and even scared them.

Anna suffered much from his temper tantrums, but tried to respond with forgiveness. She learned that a smile and silence calmed him down much quicker than confrontation. The fact of the matter was, Domenico Taigi did love his wife deeply, and her constant patience with his behavior eventually saw him become much more tolerant of things that had previously caused him to get hostile.

Anna was somewhat vain and loved jewelry and nice clothing. One day while she and the family were at St. Peter’s Basilica in Rome, Anna was overcome with the need to begin a new life of austerity. She was able to see the state of her soul and what effects her sins had on it. She immediately began a new life of obedience, submission, patience, humility, and self-renunciation.

Anna believed that marriage was one of the greatest missions from heaven. For the remainder of her married life of 47 years, she calmy interacted with her husband, soothing his temper and providing all things for her family. She used her duties as a wife and as a mom as her path to sanctity. She welcomed the life of humility in giving of herself to all those around her. This was Anna Maria’s vocation of extraordinary holiness in the ordinary world of marriage, family, and motherhood.

Shortly after her experience in St. Peter’s, Anna entered the Secular Trinitarians. She frequently visited hospitals and worked with and helped the incurably ill. It was during this time she began to experience frequent visions in which she saw the future and into people’s souls.

She became a teacher, prophet, and theologian. She could see the whole world as one piece, almost flat like the façade of a building. She became acquainted with cardinals and even knew Monsignor Giovanni Mastai who would become Pope Pius IX. Pope Leo XII held her in high regard. She composed a prayer to the Blessed Mother, and Pope Pius VII granted an indulgence to anyone who recited it.

Read more:
A laywoman’s prayer to Our Lady: For the grace to conquer the devil

Blessed Anna Maria Taigi is a patroness of housewives, mothers and families. She is also the patroness of victims of verbal and spousal abuse. She was beatified by Pope Benedict XV on May 30, 1920.