The oldest library in the world goes digital 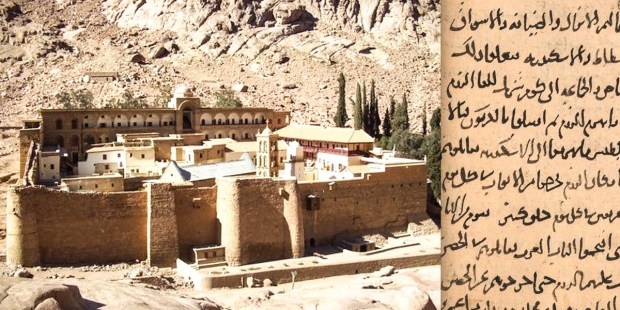 The centuries old manuscript collection held at St. Catherine Monastery, at the foot of Mount Sinai, will be digitized.

Built between 548 and 565, St. Catherine’s Monastery, officially known as “Sacred Monastery of the God-Trodden Mount Sinai,” is the oldest Christian monastery still in use for its original purpose. Thanks to its scenic location—at the mouth of gorge at the foot of Mount Sinai—and its beautiful Byzantine walls and buildings, it was nominated as a UNESCO World Heritage Site in 2002.

But one of its most important features is found inside the well-preserved Byzantine walls, where the world’s oldest continually operating library has been active since at least the year 600. Its collection of ancient parchments and medieval manuscripts including some 160 palimpsests—ancient manuscripts that were overwritten by more recent texts—is second only to that of the Vatican.

Now for the first time, St. Catherine’s centuries-old collection will be available to everyone, thanks to a partnership between the monastery, the University of California in Los Angeles (UCLA) Library, the Early Manuscripts Electronic Library and the Arcadia Fund, a British philanthropic group that focuses on cultural preservation.

The project will see the creation of an estimated 400,000 images, including texts written in Syriac, the language used in ancient Syria, and some notable examples of Arabic Christian literature that appeared during the 8th century, as Christian communities were influenced by the spread of Islam and many scribes translated Christian scriptures and liturgies into Arabic.

“The UCLA Library looks forward to making these important manuscripts available online to scholars, students and members of the public around the world,” said UCLA librarian Ginny Steel. Among the most notable texts to be digitized are the Syriac Sinaiticus, a late 4th-century translation of the four gospels in Syriac, and the Sa’id ibn Batriq, the oldest manuscript of what is believed to be the first universal history in Arabic written by a Christian author—the patriarch Eutychius of Alexandria.

Thanks to the project, scholars and visitors from all over the world will have a unique chance to observe some of the manuscripts that constitute Christianity’s cultural DNA and to learn more about the medieval history of the Sinai area, when Islam and Christianity influenced each other through literature and ideas in ways that are sometime overlooked by more friction-centered narratives of the relationship between the two faiths.

And the joint digitization effort is even more relevant at a time where geopolitical tensions in the Sinai region may put the centuries-old collection at risk—just last year a checkpoint located near St. Catherine was attacked by groups affiliated with the Islamic State.

“We are pleased to support this work to digitize the Syriac and Arabic codices of St. Catherine’s Monastery library and make them freely available to people around the world,” said Peter Baldwin, co-founder of Arcadia and professor of history at UCLA. “This project will open up new avenues of research and improve our understanding of the region’s history.”