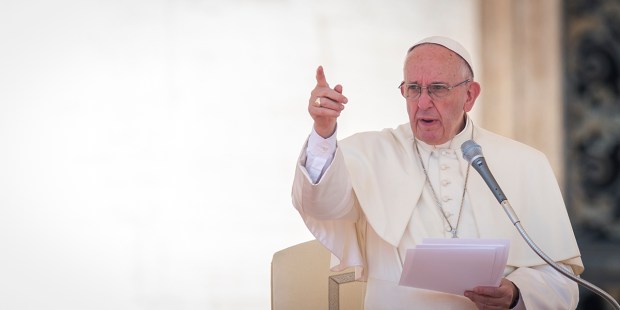 Pope Francis has spent much of his pontificate denouncing this phenomenon. But what is it exactly?

In the wake of the terrible clergy abuse scandals that have recently come to light, we’ve seen many responses and reflections from both laypeople and prelates, including Pope Francis. In his letter to the people of God on the current crisis, Pope Francis identified as one of the major sources a phenomenon he’s spent much of his pontificate denouncing: clericalism.

Clericalism is a disordered attitude toward clergy, an excessive deference and an assumption of their moral superiority. In the pithy description of Pope Francis, it’s when “Clerics feel they are superior, [and when] they are far from the people.” Yet, as Pope Francis wrote, clericalism can be “fostered by priests themselves or by lay persons”—laypeople can fall into clericalism, too! Lay people can fall into thinking that their contributions to the life of the Church are only second-rate, or that in all things, surely “Father knows best,” or that priestly virtue exhausts Christian virtue.

Now, on the one hand, we ought to esteem our clergy. They are called by God to be our leaders, teachers, and sanctifiers in the Christian life, and we owe them respect for that. After all, St. Ignatius of Antioch says that the priest is like Jesus Christ to us, and the bishop, like God the Father. He also says that, “where the bishop is, there is the Catholic Church.”

Clergy participate in apostolic power, handed on by Christ himself. They are our appointed shepherds. In fact, they have this power, given in the sacrament of Holy Orders, even when they are bad people. A priest in mortal sin can still call Christ down to the altar at Mass. He can still forgive my sins in confession, even as his own soul is “dead in sin.” A priest receives an “indelible mark” on his soul in Holy Orders, allowing him to act in persona Christi (“in the person of Christ”), and no sin can blot out that mark, and the gifts it entails. Yes, even if a priest were consigned to Hell, his soul would still bear the mark of his priesthood, undoubtedly meaning that his eternal suffering would be even greater than others’.

But this fact of the power of Holy Orders does not mean that clergy are automatically wiser or possessed of better judgment than or — this is important — morally superior to anyone else. Those ordained remain human beings, prone to all the errors — and sins — of regular people. The apostles themselves made all kinds of mistakes, from misunderstanding the words of Jesus to betraying him, and we ought not to think that their successors are immune from these defects.

Furthermore, when we consider the high calling priests and religious have received from God, we can well imagine the effort the devil puts into making them fall. This is part of why it’s especially important to pray for clerics, mindful that their life on earth is a spiritual battle.

Aristotle famously said that “virtue is the mean between extremes,” so when we’re trying to avoid clericalism, we should be careful not to fall into its opposite: anti-clericalism. While we shouldn’t place the ordained on a lofty pedestal, neither should we cast them into a pit. We should not insult or degrade either the clerical vocation or those who are in it. We should neither fawn over our clergy nor spit on them.

Jesus set the balance right for his apostles from the beginning. After the mother of James and John asked Jesus if her sons might sit at his right and left in the kingdom, the other apostles grumbled—why should those two get the honor and not themselves? Jesus told them,

You know that the rulers of the Gentiles lord it over them, and the great ones make their authority over them felt. But it shall not be so among you. Rather, whoever wishes to be great among you shall be your servant; whoever wishes to be first among you shall be your slave. Just so, the Son of Man did not come to be served, but to serve and to give his life as a ransom for many. (Matthew 20:20-28)

Among the greatest of Jesus’ followers was St. Peter, the first pope. He echoed Jesus’ words in 1 Peter 5:3 when he wrote, “Do not lord it over those assigned to you, but be examples to the flock.”

Popes from the time of St. Gregory the Great have taken the title servus servorum Dei, “servant of the servants of God.” The clergy are not here as our masters, but as our helpers. As Pope Francis wrote, “Lay people are part of the faithful Holy People of God and thus are the protagonists of the Church and of the world; we [priests] are called to serve them, not to be served by them.”

Read more:
Pope spends an hour in the confessional for priests of his diocese