How to understand the compliment Jesus paid the Apostle Bartholomew 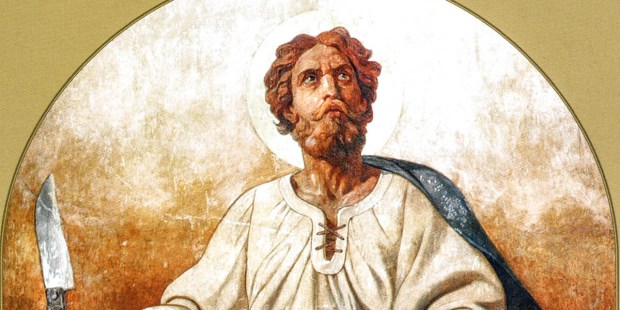 Also known as Nathaniel, the saint celebrated today was the first disciple the Gospels record as recognizing Our Lord as the Son of God.

Today is the feast of St. Bartholomew, the apostle.  An exploration of Scripture and tradition reveals him to be a missionary of integrity and contemplation, an apt example for our own age that is beset with excessive busyness and confusion regarding the nature of truth.

It is believed that, after Pentecost, Bartholomew paired up with Philip to preach the gospel in Turkey and Asia Minor. He later brought the good news to India and is thought to have died a martyr in Armenia.

At first glance, the Gospels themselves say next to nothing about Bartholomew, although his name is included as one of the Twelve. If we do a little digging, however, we find more about Bartholomew than we first realize.

Most believe it was Nathaniel.

The synoptic Gospels (Matthew, Mark and Luke) refer to Bartholomew and never mention Nathaniel. John does the opposite: He speaks of Nathaniel but makes no reference of Bartholomew. The synoptic writers always couple Bartholomew’s name with that of Philip; according to John, Nathaniel was a close friend of Philip’s, and was brought by Philip to Jesus. Furthermore, Bartholomew is listed among the Twelve in the synoptic Gospels. St. John, who never explicitly uses the term “apostle,” but likewise makes reference to Jesus’ closest group of “disciples,” includes Nathaniel among that innermost circle.

These textual inferences lead to the conclusion that Nathaniel was the same person as Bartholomew. While it might not be proven beyond a doubt, it is likely enough that the Church offers us the story of Nathaniel as the Gospel reading proper to the feast of St. Bartholomew.

Very few people can say that Jesus himself gave witness to the virtues he exemplifies. Nathaniel is an exception. We don’t have to guess why the Church holds up Nathaniel as an example of holiness: The Lord himself reveals Nathaniel’s righteousness in today’s Gospel.

First, Jesus greets Nathaniel by saying, “Behold an Israelite indeed, in whom is no guile” (Jn 1:47).

There’s more than meets the eye in this statement, which is actually a play on words. Guile, of course, implies dishonesty — someone with guile achieves what he wants with cunning and deceit.

But digging deeper, we see the allusion to Jacob, whose name became Israel, and who employed deceit to secure his father’s blessing. Furthermore, the word Jacob itself in ancient Hebrew seems etymologically to have been linked to the idea of deceit, among other meanings (cf. Gen 27:36).

Jesus, then, essentially referred to Nathaniel as “an Israelite in whom there is no Jacob,” someone capable of embracing a new call oriented toward the future. This was true of Jacob who embraced his identity as Israel, despite the dishonest start; it was also true of the apostles who, in following Jesus, embraced and became part of the transition from Judaism as it was understood in the Old Testament, to their call as followers of Jesus.

Characterizing Nathaniel as “without guile” also takes on further meaning in light of other Scripture passages. Psalm 32 tells us, “Blessed is the man in whose spirit there is no deceit.” 1 Peter 2:22, speaking about Jesus himself, says, “He committed no sin and no deceit was found in his mouth.” Finally, Revelation 21:27 says that no one who tells lies will enter heaven.

While these passages don’t directly pertain to Nathaniel, they do give us a sense of the significance of Jesus’ description of Nathaniel as one without guile: He was firmly rooted in the best of his own heritage, possessing a quality closely associated with the Lord himself, and worthy of heaven.

That’s quite a compliment.

Nathaniel, who had initially questioned whether any good could come from Nazareth, however, still seemed hesitant. The Lord assured him saying, “I saw you under the fig tree.” This phrase, too, has layered meanings. Nathaniel might, literally, have been resting under a fig tree shortly before going to meet Jesus. But “under the fig tree” in Scripture symbolically refers to the coming of the Messianic age (cf. Zec 3:10). As well, at the time of Jesus, “under the fig tree” was a common place for prayer, contemplation and meditation.

By speaking of the fig tree, Our Lord indicated to Nathaniel that he could see into the depth of his heart; he was aware that Nathaniel was a person of prayer and contemplation who longed for the coming of the Messiah.

In response, Nathaniel said, “Rabbi, you are the Son of God, you are the king of Israel,” and in so doing, became the first disciple recorded in the Gospels to have professed this awareness.

St. Bartholomew, pray for us.

Read more:
7 Catholic symbols from the early Church that we still use today