ISIS is down but far from out, UN official warns 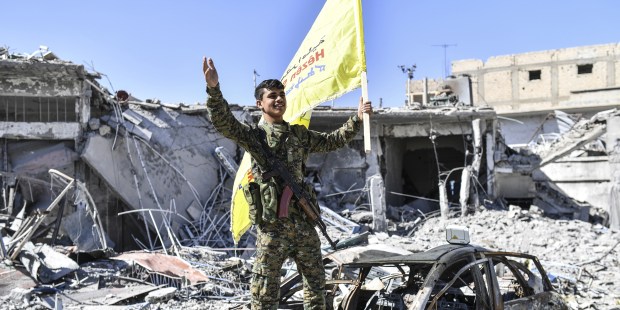 BULENT KILIC I AFP
A member of the Syrian Democratic Forces (SDF), backed by US special forces, holds up their flag at the iconic Al-Naim square in Raqa on October 17, 2017.
US-backed forces said they had taken full control of Raqa from the Islamic State group, defeating the last jihadist holdouts in the de facto Syrian capital of their now-shattered "caliphate". / AFP PHOTO / BULENT KILIC
Share
Print
John Burger - published on 08/24/18

The Islamic State group, which wreaked havoc for Christians and other religious minorities throughout the Middle East since 2014, has largely disappeared from headlines. But the  group may still have around 20,000 fighters and is continuing a transformation into a covert global network, while focusing on the activities of its regional offshoots, a United Nations counterterrorism official said.

Vladimir Voronkov, Under-Secretary-General of the UN Office of Counter-Terrorism, told the UN Security Council Thursday that despite being militarily defeated in Iraq and in retreat in Syria, ISIS remains a serious and significant concern.

Voronkov presented a new UN report into the threats posed by the jihadist organization. The report detailed how UN Member States and the UN system are continuing to strengthen, refine and promote the effective use of tools and measures to address the evolving transnational threat posed by the terrorist group and its affiliates.

The official said a core of ISIS fighters is expected to survive, thanks to ongoing conflict and instability. A significant number of ISIL-affiliated militants also exist in Afghanistan, South-East Asia, West Africa and Libya, and to a lesser extent in Sinai, Yemen, Somalia and the Sahel.

In its heyday, the Raqqa, Syria-based group attracted volunteers from around the globe, and many of those “foreign fighters” have tried to return home. Officials in their home countries are still struggling to find ways to assess the risks they pose, and must develop tailored strategies for their returning and relocation, the UN report said. Former fighters have the potential to radicalize others, whether in the prison system or wider society.

The UN report follows two US reports which also warned of ISIS’s continuing threat. Last week, the Pentagon said the group is “well positioned” to rebuild, CNN reported. And a US inspector general report said the US military estimates that ISIS still commands up to 30,000 fighters in Syria and Iraq.

“ISIS remains a threat, and even one ISIS fighter is one too many,” said Pentagon spokesman Navy Cmdr. Sean Robertson.