The “penal crosses” of Ireland: Souvenirs of an oppressed Catholic Church 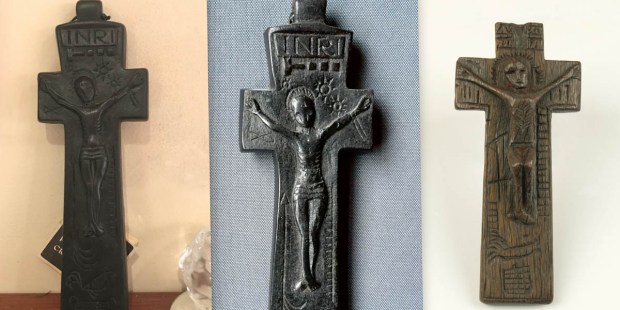 These unusual crucifixes were born of the anti-Popery laws imposed by the Protestant establishment of Great Britain.

On the occasion of Pope Francis’ visit to Ireland, it is worth reflecting that there was a time when the Irish clergy were among the oppressed. For several centuries, Catholicism was suppressed in Ireland just as it was in the rest of the British Isles. Symbols of the old faith were dealt with as harshly as the practitioners. On the Scottish island of Iona, more than 300 large carved stone “high crosses” were destroyed, mostly dragged to cliff tops and dumped in the Atlantic ocean.

In Ireland, the Celtic high crosses had a much better survival rate. As the English overlords considered them to be from a distant past before Rome came to run the Christian community there, they escaped retribution. The crosses were charming and harmless parts of the scenery that still attract tourists and other sightseers. More recent devotional icons were another matter. Crucifixes topped the list of unwelcome accessories of “Papist” practices.

The “penal crosses” of Ireland – as they are widely known – are among the most distinctive types of crucifix to have been created anywhere in the world. There is a certain nationalist fervor surrounding them, not surprisingly as they were born of the anti-Popery laws, known as Penal Codes, imposed by the Protestant establishment of Great Britain. The full title of one such law was the 1673 “Act for preventing dangers which may happen from popish recusants.”

Belief in transubstantiation was enough to have applicants barred from civil and military employment. Life, labor and worship for Catholics were all made difficult by laws that were only repealed fully in 1920. Jesuits, of which Pope Francis is the most prominent current example, received especially merciless treatment.

There are differing versions of the purpose that Irish penal crosses served. The more romantic of these proposes that the narrow crossbar was to enable priests and others to hide the cross easily in a sleeve. Beyond doubt is that they were also made for pilgrims visiting the Sanctuary of St. Patrick at Lough Derg in Donegal. Sizes vary from a few inches to more than one foot. Most were carved from wood, sometimes from bog oak – a semi-fossilized tree that has been steeped in peat water for centuries or longer. The symbols on penal crosses usually include the instruments of the Passion. A favorite for Irish craftsmen was a folk tale of the cockerel that leaped out of the pot in which it was being cooked after Judas’ wife observed that the chances of this happening were about the same as Jesus rising from the dead.

The penal crosses were probably the first souvenir items ever to be produced in Ireland. This does not reduce their sanctity. Many of the most sacred items in the past were highly revered by the pilgrims who bought them and then placed in important churches and monasteries. Inscribed dates on the back of the crosses provides more than mere proof of the spiritual meaning that the crosses held; it is also just about the only way of dating them. As souvenirs go, they are considerably more reverential than some of the merchandise that has accompanied papal visits over the years. Some might remember Pope St John Paul II’s tour of the USA in 1987, which provided an opportunity for lawn-sprinkler manufacturers to produce an image of the pontiff with the words “Let us spray.”

Matters were rather more serious in Ireland during the years of the Penal Codes. The penal crosses are a reminder of this, as Pope John Paul II addressed the crowd in 1979 at the same Phoenix Park location in Dublin that Pope Francis is holding Mass this weekend: “As I stand here, in the company of so many hundreds of thousands of Irish men and women, I am thinking of how many times, across how many centuries, the Eucharist has been celebrated in this land … in stately medieval and in splendid modern cathedrals … at Mass rocks in the glens and forests by ‘hunted priests’ … or at great open-air hostings of faithful — on the top of Croagh Patrick and at Lough Derg.”

Like his predecessor, Pope Francis will not be going to Lough Derg. Two years ago, during the Jubilee Year of Mercy, His Holiness did send the Papal Nuncio to the shrine, where a Holy Door of Mercy was opened. Since 1870, as declared by Pope Pius X, the Lough Derg pilgrimage has been a source of indulgences – and irritation to the former Protestant authorities.

Penal crosses are now just one of the numerous attractions of Lough Derg. There is a profusion of souvenirs these days, mostly imported and with a more finished appearance than the simple old crosses of the past. It is the hand-carved exuberance of the 18th and 19th century versions that makes them stand out. They also stand out because they are in very high relief. Passion is what they are all about, with an almost tribal energy that could be mistaken for some of the Christian art that has emerged from Africa over the centuries.

Penal crosses are something that the Holy Father would find fascinating if he were introduced to them. Despite their primal charm and expressiveness they remain one of Ireland’s best-kept secrets. Although they speak eloquently of suffering and new beginnings, it is almost certain that souvenir interpretations of Celtic high crosses will be focal point of any gift exchanges that Pope Francis will experience this weekend.