This saint defied the rich to establish free schools for the poor. He’s now patron of Catholic schools. 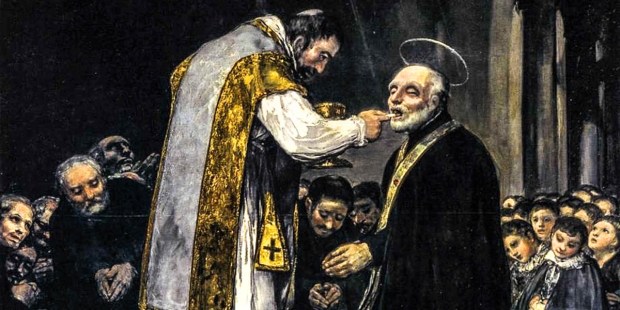 St. Joseph Calasanz, from the 16th century, was shown in a dream that he needed to help homeless and orphaned children.

Joseph Calasanz (also known as Joseph Calasantius) was born in the Kingdom of Aragon (today called Spain). At the age of 14, he was already feeling a strong calling to the religious life. His dad wanted him to get married to carry on the family name, but  Joseph had different feelings. He ultimately decided to pursue his calling from God, and was ordained a priest on December 17, 1583. He was soon made the secretary and confessor to the bishop, and tasked with establishing order and discipline among the clergy, which he did.

He became vicar-general of Trempe, Spain, and it was during this period of his life that both his bishop and his father died. It was in the midst of this grieving period that Joesph had a vision. “Go to Rome,” he was told. In his dream, he saw many children surrounded by angels. He gave away his inheritance, renounced his worldly possessions and headed to Rome.

Upon arriving in the Eternal City, he was deeply moved by seeing so many poor, uneducated children. His credentials helped land him a position in the residence of Cardinal Ascanio Colonna with the job of being his theological advisor and the tutor to the cardinal’s nephew.

He quickly learned how many poor, uneducated children were in need of his help. Many were orphans and others were simply homeless. He tried to get them into school but the teachers refused, demanding much more money to teach “vagabonds.” But God was waiting for the right moment.

Joseph asked a priest friend, Father Brendani, if he would help him to solve the problem of these poor, uneducated children. Amazingly, Father Brendani offered him two small rooms at his parish. Two other priests, believing in the mission of Father Joseph, agreed to work with him. In November 1597, only five years after arriving in Rome and having to also learn the language, Father Joseph opened the first free school for poor children.

Other priests began stepping forward to help, and soon they needed to expand. In 1602, they managed to find larger quarters. Pope Clement VIII (1592-1603) and Pope Paul V (1605-21) contributed to their efforts. Soon, Joseph was in charge of a half-dozen teachers and hundreds of students. Then Joseph began to organize his teaching priests into a religious community.

The work of Joseph Calasanz was spreading. By the end of the summer of 1616, they had opened a free school in Frascati, a town outside of Rome. Then on March 6, 1617, Pope Paul V approved a new order which was called (this is long) the Pauline Congregation of the Poor Clerks of the Mother of God of the Pious Schools. The order became known as the Piarists.

Joseph Calasanz and his 14 priest followers received their new habits on March 25. They became the very first priests whose primary mission was to teach elementary school kids … no matter who they were or what their circumstances.

Read more:
As we head back to school, let’s stop and ask: What is learning FOR?

However, many of the ruling class feared the education of the poor. They predicted it would lead to social unrest and war between the classes. Other priests and religious feared that they would be absorbed by the Piarists. As Joseph’s order grew and more schools opened, some of his own order began to turn against him. They even managed to convince the pope that something was wrong within the order.

Joseph Calasanz, a man who loved his priesthood and fought for the education of poor kids, was arrested and forced to stand trial before the Holy Office, aka The Inquisition. The work of his order was shut down and his members absorbed by the local diocese. Joseph did not lose hope but died on August 25, 1648. Twenty years later, Pope Clement IX completely restored the order and vindicated Joseph Calasanz.

St. Joseph Calasanz was canonized a saint by Pope Clement XIII on July 16, 1767. He is the Patron Saint of Catholic Schools. His feast day is August 25.

Read more:
14 Famous people whose lives were shaped by their Catholic education