This college quarterback is back on campus, but focused on a higher game 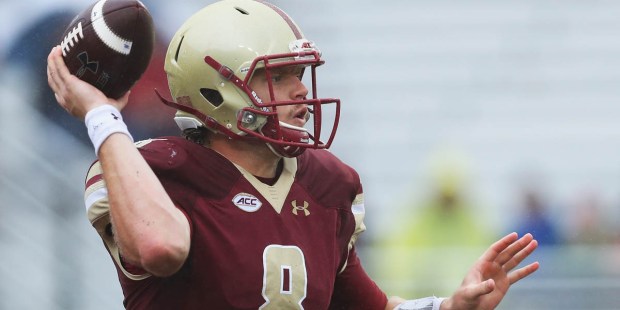 Patrick Towles is part of Varsity Catholic, and he’s determined to share what he’s found with fellow athletes

Former Boston College quarterback Patrick Towles, 24, has become a missionary with Varsity Catholic, a division of the Fellowship of Catholic University Students (FOCUS), which helps student-athletes on college campuses to develop virtuous characteristics and deepen their Catholic faith during their college years.

Varsity Catholic was established in 2007, and since then more than 2,000 student-athletes have participated in the group’s Bible studies.

Towles is one of 164 Varsity Catholic missionaries serving on 99 campuses in the 2018-19 school year, being assigned to serve for two years at Louisiana State University.

Towles is from Kentucky. He led his Highlands High School team to three consecutive state titles and a 44-1 record as a starting quarterback 2009-11. He went on to be a successful quarterback at the University of Kentucky and Boston College, with 6,829 passing yards and 36 touchdowns.

He became involved with FOCUS at the University of Kentucky, where he started a Bible study with other players. He later transferred to Boston College.

He speaks with Aleteia about his life and mission:

Tell me about your religious upbringing.

Towles: I was raised Catholic, and attended parochial schools through the 3rd grade. We went to Mass on Sundays and holy days. Faith was important in our home, but it was not important to me. I didn’t understand why we were Catholic, and why we did the things we did. I did go to CCD classes, but I did not get good catechesis.

How did you get interested in Varsity Catholic, and what impact has it had on your life?

While I was at the University of Kentucky, I went to a Bible study. There was a Catholic guy in the group, and he encouraged me to come to a FOCUS event. It was at that time I was introduced to Eucharistic adoration, and it changed my life.

College athletes are starving for Jesus. They have an emptiness only He can fill. And, once you have a relationship with Jesus, you can’t not share it with people. So, I started a Bible study with the guys on my football team. I told them that there was this guy named Jesus who wants to be Lord of their lives. We had as many as 16 guys coming during the year.

Read more:
How to spend an hour in adoration

What are you doing as a missionary at Louisiana State University?

I started at the beginning of August. As part of Varsity Catholic, my primary focus is athletes. Other divisions of FOCUS work with other student groups.

We’re in the process of developing authentic friendships with students. We might set up a table on campus and talk to people, go to campus events or, since with my sports background I’ve met a lot of people, I work the connections I have to establish friendships. Our goal is to develop missionary disciples who will go out and share the Gospel. Souls are at stake, so we do all we can to be successful.

What training have you had?

In June, I reported with other FOCUS missionaries to Ave Maria University in Florida for five weeks. The first week was human formation, and the second spiritual formation. It was during the second week that it was stressed that prayer must be the basis for everything we do. The third week was intellectual. It was my favorite week. It included apologetics; what we believe and why. The fourth and fifth weeks were apostolic; how do we give what we have?

The training is ongoing, as we’re given a regular reading plan that includes Scripture and catechism. As we complete our reading, we discuss it with the team.

Read more:
This Scripture passage will help you talk to your family about God

What did your family and friends think about you being a missionary?

I received some pushback, as some didn’t understand what I was doing. I have friends who think I’m crazy.

My parents have been 100 percent supportive, however, as have other members of my family. Faith has become more important in my life, as well as in the lives of many in my family. It’s amazing to see how Christ works in each of us.

How has your missionary work been going so far?

It’s been both challenging and rewarding. Where I’m living in Louisiana seems to be a very Catholic place. However, many are nominally Catholic, only giving God an hour a week for Mass. But Christ doesn’t want a little from us, He wants everything.

But it’s also been rewarding, helping people to understand the message of the Gospel and take it to heart.

Read more:
Jesus isn’t a fairytale, and you know that! Pope calls us back to our certainties

How has your successful background in college sports helped you to evangelize?

It’s been a great aid in helping me to connect with college athletes. They respect what I’ve done, and I know how to talk to them. It’s opened the door to some wonderful conversations. I want them to know that I’m here to make Jesus Christ known in the locker room, on the field and in their hearts.