Study shows Catholic school students have an advantage over other students 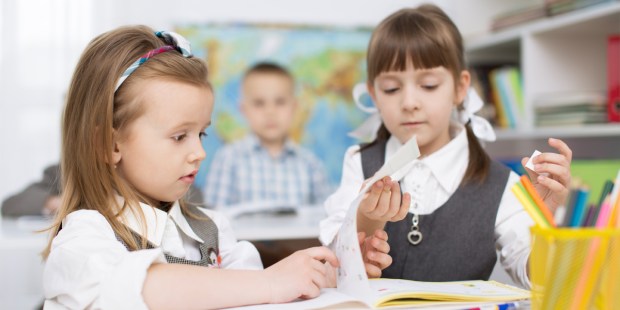 Yellow buses on the streets and back-to-school specials in the stores. Yes, it’s that time of year again.

This year, a new study suggests that parents sending their kids to Catholic schools have at least one advantage over those using public schools: the gift of self-discipline.

Catholic schools have fewer discipline problems because student by and large are better trained at self-discipline, the study found.

“Self-Discipline and Catholic Schools: Evidence from Two National Cohorts” was commissioned by the Thomas B. Fordham Institute, a think tank focusing on education policy. It was conducted by Michael Gottfried, professor of education at the University of California at Santa Barbara, and a doctoral student there, Jacob Kirksey. The researchers looked at data from national studies done in 1999 and 2011. Each one involved teachers’ responses to surveys concerning a total of almost 20,000 early elementary school students.

“Over the years Catholic schools—the largest provider of private education in the United States—have been particularly committed to the development of sound character, including the acquisition of self-discipline,” said the study’s executive summary, published May 31.

According to Fordham’s summary, the analysis revealed three key findings, that students in Catholic schools:

The Fordham Institute (which has no relation to the Jesuit Fordham University in New York) suggested that public and other private schools might learn some lessons from Catholic schools about how positive behaviors can be fostered.

“Since Catholic school doctrine emphasizes the development of self-discipline, it seems likely that Catholic schools devote more time and attention to fostering it,” the report stated. “And their apparent success in doing so suggests that schools that focus on self-discipline are capable of inculcating, developing, and strengthening it over time—in the same way that other schools might focus on athletic skills to win track meets or football games. If other schools took self-discipline as seriously as Catholic schools do, they would likely have to spend less time, energy, and political capital on penalizing students for negative behaviors.”

Though the study authors admitted that we know little about how schools can foster self-discipline, they said it seems likely that both direct and indirect methods play some role in Catholic schools’ success.

“At least some of these methods are transferrable to other contexts,” they suggested. “For example, an explicit focus on self-discipline might be reflected in a school’s curricula, whether formal or informal. Similarly, a school’s discipline policy could enumerate any number of approaches whereby teachers and students could forestall bad behavior. Alternatively, higher levels of self-discipline may be fostered implicitly—for example, through educators’ daily interactions with students in the classroom or via well-chosen and well-managed extracurricular activities with mentors or other adults who model self-discipline.”

Finally, the study acknowledged the role of religion in the fostering of self-discipline.

“The most obvious feature that Catholic schools and similar faith-based schools have in common is their focus on religion—including such specifically Judeo-Christian values as humility, obedience, kindness, tolerance, self-sacrifice, and perseverance,” the study said. “It is difficult to pin down whether and how these values, taught in relation to the life of Christ, may influence a child’s behavior. Perhaps students are more likely to internalize such values when they know they are loved not only by their teachers but by their Creator, or when they perceive that misbehavior may have eternal consequences.

“Religion can mold hearts and minds,” the study concluded, “in ways that suspensions, restorative justice, and Positive Behavioral Intervention and Supports (PBIS) can’t begin to match.”