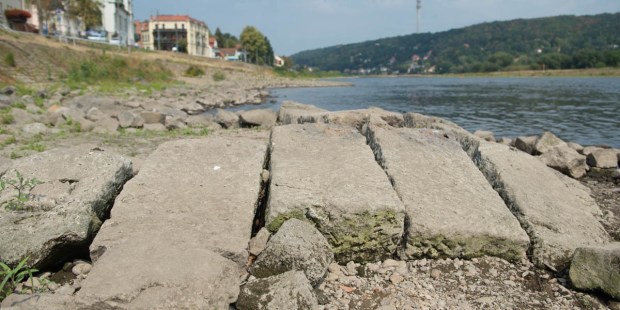 These “hunger stones” have long been the heralds of a poor harvest.

The seemingly endless dry season in Europe is continuing to uncover pieces of the continent’s extensive history. So far, the drought has revealed ancient stone henges that dimple farm landscapes and aided the discovery of the probable location of the home of St. Oliver Plunkett. Now, the Elbe river of the Czech Republic, which flows through Germany, is running low enough to reveal messages on the rocks.

Known as “hunger stones,” these rocks usually rest well below water level, but they appear each time a drought threatens the region’s water supply. Messages left on boulders deep in the river have been used for centuries to warn people that hard times are coming. One stone, dated from 1616, has a particularly chilling message: “If you see me, weep.”

Another stone, on the German side of the river, says, “If you will again see this stone, so you will weep, so shallow the water was in the year 1417.”

The Associated Press reports that more than a dozen of these rocks have surfaced in recent months. A detailed study of these rocks, from 2013, notes that every major drought prior to the 1900s has been recorded on the “hunger stones.”

While the rocks do not state why their messages seem so morbid, it is assumed that the authors were “weeping” because the drought threatened the food supply. Indeed the current drought is doing just that, as reports come in that there is little to no grass left to feed livestock.

The German goverment has vowed to help relieve farmers in their time of trouble. However, reports suggest that 21st-century droughts will only get worse, and officials may need to find a more permanent solution to this water crisis.