Suffering from sciatic pain in pregnancy? Try this effective technique 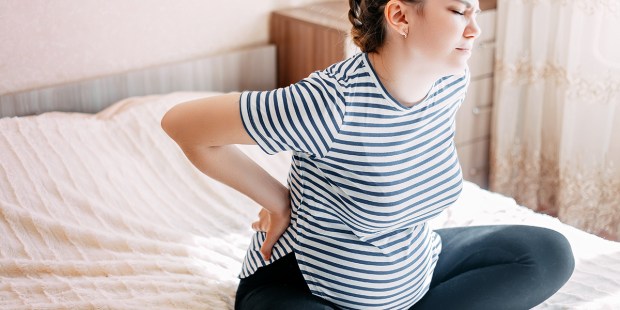 Nerve gliding is better than stretching because it uses specific movements to release the nerve and improve mobility.

When I was pregnant with my fourth baby, I had the most miserable sciatic pain of my life. I would roll out of bed (literally) and cling to the bedpost for a solid five minutes as pain radiated down my hip and leg from the pressure of my body weight and gravity.

When the pain settled from excruciating to merely very painful, I would hobble toward the kitchen and begin my day. Sometimes the pain grew so bad I would have to sit down, but I always hated having to resort to sitting because I would inevitably have to stand up again and suffer through those agonizing minutes of extreme pain.

I literally tried every remedy in the book. I stretched, went to physical therapy, modified my diet, wore a support band, drank the tears of virgin unicorns, and still the only thing that relieved my sciatic pain was (you guessed it) giving birth.

So when I came across the concept of nerve gliding at Furthermore last weekend, I was intrigued — mainly because nerve gliding claims to target what stretching can’t help with, impingement:

Nerve gliding is a stretching technique that takes the body through specific ranges of motion to free up injured nerves and improve mobility. When nerves get injured from things like surgery, trauma, or repetitive motions, they lose their ability to slide within their sheaths during movement. This leads to pain and a loss of mobility, explains Joe Gambino, DPT, CSCS, a New York City-based physical therapist.

Sciatic Nerve Glide: Lie on back with both feet straight out. Lift right leg so knee is bent to 90 degrees, shin parallel to floor, and grasp the back of the knee with both hands. Slowly straighten the leg, bringing it perpendicular (or as close as possible) to the floor, and keep ankle relaxed. When you can’t straighten the leg any more, bend the ankle toward you so the bottom of foot points toward the ceiling. Relax ankle, then lower leg. Repeat on other side.

This weekend, one of my campers at a Saturday workout mentioned that she was having sciatic issues and I leapt at the chance to make her my guinea pig. In fact, I probably displayed a shocking lack of sympathy when I responded with “Oh, good! I have something for you to try!”

But even more shocking was the fact that she began to feel the sciatic nerve releasing almost as soon as she began to straighten her leg. She repeated it three times before standing up.

When she got to her feet, she shook her legs out a little and said that the pain wasn’t gone, but it was noticeably diminished. As she gathered her mat and bag, I could tell immediately that her range of motion had improved just from those few reps — and I instantly regretted that no one had ever shown me this simple, effective remedy for the blinding pain I lived with during that fourth pregnancy.

While that particular camper isn’t pregnant, sciatic pain is always caused by impingement of the sciatic nerve. Unless it’s the weight of the baby restricting the movement of the nerve, nerve gliding should be an effective and easy remedy for a common but painful condition that plagues so many women during pregnancy. If that’s you, try it out — or pass it along to your pregnant friend, cousin, or neighbor. Trust me, they’ll be grateful to find any kind of relief.

Read more:
Help! I love my baby, but I hate pregnancy!