Meet Bepi: The oldest of a poor family who started parish formation classes and carried candy in his pockets 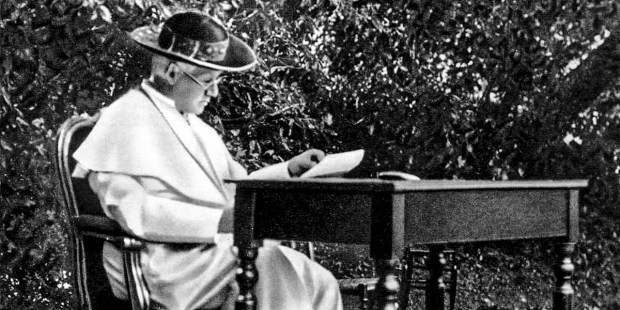 We know him as Pope St. Pius X, but his beginnings were humble, such that he reacted to being named a cardinal with “anxiety, terror and humiliation.”

His full name was Guiseppe (Joseph) Melchiorre Sarto, but his family called him Bepi. He was born on June 2, 1835, in a small farming village near Riese, Italy. His dad was a mailman and his mom a dressmaker. The Sartos had nine children, and Joseph was the oldest. When Joseph was 11 years old, he told his dad he wanted to be a priest.

His father, with the assistance of the local parish priest, managed to have Joseph accepted into one of the better high schools in the area. The boy had been first in his class all through grade school, and it was the same for him in high school; he graduated at the age of 15.

After high school, Joseph entered the seminary in Padua. He had a brilliant mind, and he also graduated from the seminary at the top of his class. In 1858 he was ordained a priest. He was assigned to the village of Tombolo and was an assistant pastor there for the next nine years.

Don (Father) Sarto’s priesthood blossomed quickly. He had a deep devotion to the Holy Eucharist, loved young people, and, as the oldest boy from a large, poor family, he had a deep understanding for the poor kids in his parish. This led him to start an after-school program in Tombolo to help kids learn about their faith and to also tutor them in reading and writing.

It was not long after starting the after-school program that Don Sarto began a similar evening program for adults. His efforts are considered the foundation for modern catechism and adult education programs in parishes today.

Don Sarto’s priestly life began to expand. He was named the pastor of Salzano in 1932 remaining there for nine years. His reputation for helping the poor quickly grew. He helped fund schools and the nearby hospital when cholera struck his parishioners. Don Sarto rarely slept, and the people gave him a new nickname; “Perpetuum mobile” (perpetual motion).

His reputation continued to grow, and soon he was given the title of Monsignor. On November 10, 1884, he was consecrated as the Bishop of Mantua. He pleaded with his superiors to allow him to remain where he was and even sent his request to the Vatican. The pope sent him a one-word reply: “Obey.”

Bishop Sarto quickly managed to re-energize and educate his priests. In less than six years the diocese was transformed into a spirit-filled diocese with churches full on Sundays.

Pope Leo XIII elevated Joseph Sarto to Cardinal on June 12, 1893. The new cardinal, when interviewed by a local newspaper, told them he was “anxious, terrified, and humiliated.” He immediately went home so he could celebrate Mass for his elderly mom, his relatives, and his friends.

On July 20, 1903, Pope Leo XIII died. On August 4, 1903, Joseph Cardinal Sarto was elected pope. He took the name Pius because he said, “As I shall suffer, I shall take the name of those popes who also suffered.”

Pope Pius X proved to be a very different pope than others had been. It is said he would sneak out of the Vatican through little-known garden passageways and visit the sick in local hospitals. Many times he would invite regular folks to have dinner with him.

The new pope quickly developed a reputation for his love of children. He carried candy in his pockets for the children in the streets. He would gather them around and ask them how they were doing and what were their interests. He even held weekly catechism classes in the Vatican courtyard. The pope also decided to require the Confraternity of Christian Doctrine to be in every parish. He wanted all children to be taught the faith.

When the pope ascended to the Throne of Peter, the age for receiving First Holy Communion was set at 12. He never liked that age, thinking it should be younger. Then he heard of “Little Nellie of Holy God.” Nellie was a toddler from Ireland who miraculously had mature knowledge of Christ in the Blessed Sacrament. When the Holy Father heard about her he issued a proclamation called Quam Singualri, lowering the age to receive First Holy Communion from 12 to the age of reason, usually considered around 7.

Pope St. Pius X, please pray for us and the Church you served so well.