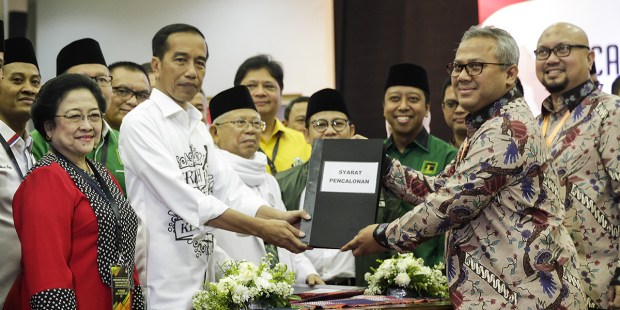 Indonesia is the world’s largest Muslim-majority nation. But there is a significant Christian minority population (about 10 percent), as well as much smaller communities of Hindus and Buddhists.

But a radical Islamist ideology has been appearing around the country in recent years, so much so that the current president, Joko “Jokowi” Widodo, a moderate Muslim, is resurrecting the country’s founding secular ideology, known as “Pancasila.”

Religion News Service described Pancasila as a set of principles including “belief in the the One and Only God.” Historically, Pancasila has been “thought to demand respect for the country’s formally recognized religions—Islam, Protestantism, Catholicism, Buddhism, Hinduism and Confucianism.”

“Promising a unified Indonesia and social justice for all citizens, it has been considered a key to Indonesia’s relative stability since it gained independence from the Netherlands 73 years ago,” RNS said.

The concept fell into disuse in more recent years, but it was revived after the former governor of Jakarta, a Christian, was defeated in his bid for re-election in a campaign in which Islamic identity played a key role. The former governor, Basuki Tjahaja Purnama, known familiarly as “Ahok,” was jailed on charges of blaspheming the Quran after his opponent took power.

President Jokowi subsequently declared June 1 a national holiday. That is the date in 1945 when Sukarno, who would become the nation’s first president, stated the principles. A Pancasila Promotion Group, with members drawn from Indonesia’s Islamic, Buddhist, Hindu and Christian communities, was inaugurated.

Jokowi also directed the Ministry of Justice and Human Rights to disband groups that are anti-Pancasila. The regulation has been used to go after far-right Islamic groups, most notably Hizb ut-Tahrir, which was officially banned last year, and was used to justify sentencing the radical cleric Aman Abdurrahman to death in June, the news service said.

In May, three suicide bombing attacks on churches in Indonesia’d second-largest city, Surabaya, left at least seven worshipers dead and at least 43 wounded. The attackers were believed to be Islamic State sympathizers.