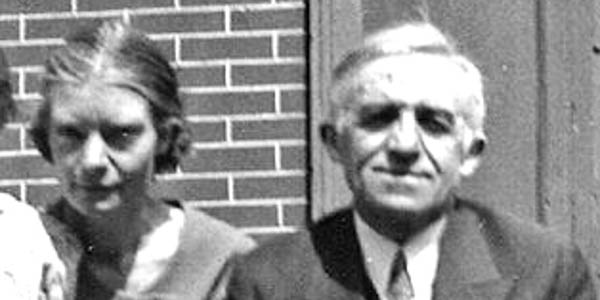 Peter Maurin was a little like Chesterton: fun to read and able to say good things well.

“I want a change,” he said, “from a society of go-getters to a society of go-givers.” A nice turn of phrase that people will remember, and wiser than it appears. A lot of us don’t put the enthusiasm and energy into giving that we put into getting. Not just giving money, either, but comfort, sympathy, a listening ear, that kind of help. We don’t look for the chances to help others the way we look for chances to make a deal.

That was the kind of insight said simply that Peter Maurin could pull off in his Easy Essays. It convicted me. But only because he’s fun to read and he says good things well, and often with this kind of cleverness that makes you see what you weren’t seeing before. That’s his only book and it was put together by his friends after he died. The whole book can be found here.

Almost everyone knows about Dorothy Day. (Her I’ve written about here and here.) Fewer know about her mentor and colleague. The Frenchman Maurin (pronounced “Maw-rin”) came to this country in 1925, worked all sorts of jobs, and read and read, and also talked and talked.

A mutual friend sent him to meet Day in 1932 because they were thinking alike. He lived a very simple life, emphasizing trusting in Jesus and loving other people as practically and personally as possible. He pretty much only owned the clothes on his back. Maurin helped Day create the Catholic Worker movement, including its Houses of Hospitality and its newspaper. He died in 1949. He had been a man who practiced what he preached.

Maurin arranged each easy essay like a poem, which works better than you might expect. The average essay is 20 to 30 lines long. Some work better than others. Readers should know that most express Maurin’s political views, which will not to be to everyone’s tastes.

Read more:
Dorothy Day: A saint like you and me

Many of the easy essays take up how we should live as Catholics. Like this one:

There is no better way to be
than to be
what we want the other fellow to be.

Here’s another, similar to the one with which I began:

Man is saved through faith
and through works,
and what one does
has a lot to do
with what one is.

Maurin insisted on the power of thinking in a way few today do. This sounds like G.K. Chesterton (he mentions Chesterton three times in the book):

Maurin against the alternatives

Maurin wrote most of the easy essays in the l920s and the 1930s after the Depression and they reflect the struggles of the time. He often engages the popular alternatives to Christianity. You will remember that Marx called religion “the opiate of the people.” This is what Maurin did with that idea:

Maurin could speak very sharply about the alternatives.

In Cuba, Germany, China, Mexico, Italy,
Russia, dictators have found
their greatest support
among college students
eager for action.
Academic college professors
are interested in thought,
not in action.
So we have on one hand
thought without action
and on the other hand
action without thought.

The alternatives he addressed weren’t just political ideologies like those. He noticed how secular America was and didn’t like it. He saw that secularism created an empty space that Americans would fill with less crucial things. He wrote about public education:

He followed this up with:

When religion
has nothing to do
with education,
education is only
information:
plenty of facts
but no understanding.

Here are a few more excerpts, which I’ll put in normal sentence form:

The so-called Dark Ages, which were not so dark when the Irish were the light.

The Sermon on the Mount will be called practical when Christians make up their minds to practice it.

One I plus one I makes two I’s and two I’s make We. We is a community, while “they” is a crowd.

A bourgeois is a man who tries to be somebody, by trying to be like everybody, which makes him a nobody.

To bring religion into the profane is the best way to take profanity out of the profane.

Read more:
Pope: We must let children play! To play is to dream …

I’ll share one complete easy essay, titled “At a Sacrifice.” It combines a lot of Maurin’s themes: the example of the early Christians, the call to personal sacrifice, caring for each other in practical ways, and how our example can change the world. Peter Maurin wasn’t one to pass the buck.