Is there a correct posture for private prayer? 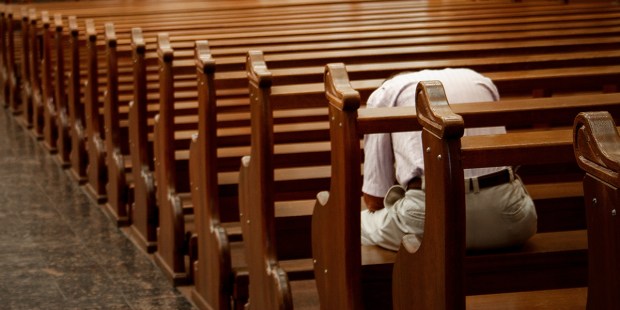 Does it matter if I stand, sit or kneel?

Should we stand, sit, or kneel while we pray at home? Does it really matter?

While it may seem strange to question the physical posture of our private prayer, it is an important question to ask. In fact, the manner in which we pray is a very important aspect of prayer.

Catholics firmly believe that we do with our body does have a direct impact upon our soul. This unity of body and soul allows all of our senses to be engaged in prayer (sight, hearing, taste, sound, touch) and assists our soul in being raised up to God.

The Catechism of the Catholic Church reinforces this fundamental truth and teaches us that prayer involves our whole being, “Whether prayer is expressed in words or gestures, it is the whole man who prays”(CCC 2562).

On account of this unity, the Church’s public forms of worship contain numerous elements that are visible and engage our bodily senses. The Catechism further explains, “In human life, signs and symbols occupy an important place. As a being at once body and spirit, man expresses and perceives spiritual realities through physical signs and symbols. As a social being, man needs signs and symbols to communicate with others, through language, gestures, and actions. The same holds true for his relationship with God” (CCC 1146).

As we can see, the Catholic Church does not have “empty rituals.” Each and every exterior act has a specific meaning and purpose that is designed to lead us to the worship of our Creator.

Cardinal Ratzinger (Benedict XVI) further solidifies this teaching and writes in God Is Near Us: The Eucharist, the Heart of Life, “[O]ur religion, our prayer, demands bodily expression. Because the Lord, the Risen One, gives himself in the Body, we have to respond in soul and body … all the spiritual possibilities of our body are necessarily included in celebrating the Eucharist: singing, speaking, keeping silence, sitting, standing, kneeling.”

So then how should we pray; stand, kneel, or sit?

Read more:
This is why church pews were invented

Kneeling is often seen in the Gospels as a way to express supplication and adoration. Often in the New Testament kneeling is preceded by an act of faith, “I do believe, Lord,” and completed by an act of adoration at the majesty of God (cf. John 9:35-38). Elsewhere, like in many of the healing narratives, the person is kneeling in supplication, asking to be healed. In the Old Testament, we see Solomon kneeling at the dedication of the Temple (cf 2 Chron 6:13). Ratzinger explains in The Spirit of the Liturgy

that, “When a man kneels, he lowers himself, but his eyes still look forward and upward, as when he stands, toward the One who faces him.”

Standing is also a very common way to pray, found both in the Old and New Testament. It is seen as the posture of the “victor,” standing over one’s enemies, and is also the expression of “readiness.” At the Passover, they were told to eat their meal standing, with “staff in hand,” ready for the coming of the Lord. Many mosaics of early Christians show them standing in prayer, ready and waiting for Christ’s Second Coming.

Sitting is more of a recent invention and is typically done during the recitation of readings at Mass and during the homily. In this context, sitting, is a posture of recollection and meditation. It is a posture of listening to God’s word.

To summarize these various ways of praying:

The next time you go to your “inner room” to pray, consider these many and varied ways of praying and consider using them to reflect the type of prayer that you want to express. We should not only pray with our soul, but pray united with our body in a marvelous symphony of praise.

Read more:
In what posture did the early Christians pray?