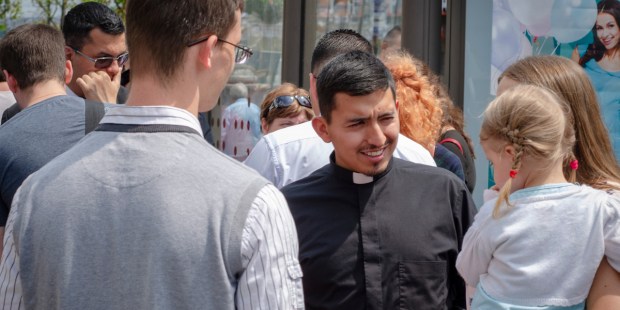 Struggling with newly tarnished image of the priesthood, clerics find reasons for hope among the hurting.

When a grand jury reports that 300 Catholic priests have been at least credibly accused of sexual abuse in one state alone, albeit over the course of 70 years, it leaves a certain impression on the public. Every priest is suspect.

So it might not be surprising that priests showing up in public, even if they are innocent of such charges, would be taking some heat. One priest, Fr. Michael Sliney, wrote on his Facebook page August 21, a week after the Pennsylvania grand jury issued that report, “Putting on my collar … especially now. Its presence on the street … is raising eyebrows.”

Another priest, Fr. Basil Hutsko, didn’t even have to go outside: a man came into the sacristy and began beating him up, saying “This is for all the kids,” The attack sent the Merrillville, Illinois, priest to hospital.

It’s understandable that some clergymen might be reluctant to appear in public wearing clerical garb.

That was the thought in Fr. Jonathan Slavinskas’s mind one day when he was heading out in Worcester, Massachusetts.

“This week I have been walking around with a heavy heart. I have been completely angry and frustrated as a result of the Pennsylvania abuse reports and the [Archbishop Theodore] McCarrick situation. My continual prayer has been for the victims. As each news story continues, my heart is torn more apart.”

He pondered what his Roman collar, that distinctive white band that Catholic priests wear around their necks, would now represent to the world.

“As I walked around, I wonder how many people who glance at my collar will wonder, ‘Is this one too?'”

In a recent article he wrote that was shared multiple times on social media, he admitted to being tempted to remove the collar, which should be a sign to others of the specialness of his vocation but has become in many eyes a sign of ignominy.

“As I moved from the rectory to the church, from the halls of the nursing homes and hospitals, as I’ve passed out school supplies to numerous neighborhood youth, I’ve had this one thought, ‘Take the collar off,'” he wrote. “This morning, I didn’t want to put my collar on. I was ashamed. I was tired. I was angry. I didn’t want to be painted with a stained brush. But I did.”

Later in the day, he was visiting sick parishioners in the local hospital.

“I walked by a woman standing outside a room,” he recalled. “As I continued to the elevator, she came up from behind, asking if I was a Catholic priest. I was ready to take the hit … but as I turned and said ‘Yes,’ she asked with tears in her eyes if I would anoint her brother who was dying with cancer.”

Fr. Slavinskas reflected that no matter what he’d thought about the collar recently, the woman in the hospital “saw it as a sign of hope and of the presence of Christ. If I decided not to wear it, her brother would not have received the sacrament he needed and her entire family might not have experienced comfort.

“I do not know what tomorrow will bring, but I know I have to put that collar on,” he continued. “Ministry continues, even though it might be harder, because there are still souls that Christ is seeking to bring into His presence and peace.”

In an interview, Fr. Slavinskas said that this past week he got a message from the niece of the man he had anointed in the hospital. “They had come across the story on Facebook, so they sent me a note of gratitude. He had passed away an hour after I had left. They were thanking me for the sense of peace they had experienced during those moments.”

The article’s appearance also motivated a family whose brother had overdosed several years ago to get in touch with the priest. The man who overdosed had been a victim of clergy abuse.

“He dealt with that through drugs and never brought that forward,” Fr. Slavinskas explained. “The priest had already been removed. But the family had read that letter, and they were filled with so much anger, and they felt comfortable being able to go talk to someone within the Church. I literally just met with them this morning for several hours, just talking with them about the pain they’re experiencing and directing them to who they need to speak to in the diocese. Part of that is the healing process they need to be able to speak about it. That was very unexpected, so maybe the whole purpose of this letter was just to be able to meet with this family in my own city, so they can begin to get the healing that they needed.”

The priest said that St. Bernard’s Church of Our Lady of Providence Parish in Worcester, where he is pastor, is an inner city parish. “I deal with a lot of inner city individuals, with a lot of broken families, broken homes, a lot of violence, gang activity, drugs, things like that.” So his parishioners are more concerned with everyday matters of survival and don’t really have the leisure to follow the latest scandals in the news, on blogs and social media.

“That makes it very easy for me to continue ministering the way I’m supposed to minister in this area, because they see me as the faith that’s here to help them. They see me as an integral part of the neighborhood that is their sign of hope and peace in the midst of the challenges in their lives. … In a parish like the one I’m in people come to know the love of Jesus Christ first, I think, through the physical things we can be doing, in doing the social aspects of the Church, and literally, feeding them, assisting them, clothing them, and things like that, being present to them, and through that we’re building these relationships which will  bring people through the church doors, to a new experience of Christ in the liturgy.”

MORE TO READ: How the laity is responding to the latest sex abuse scandal in the Church