Cullen Potter: The boy who lived 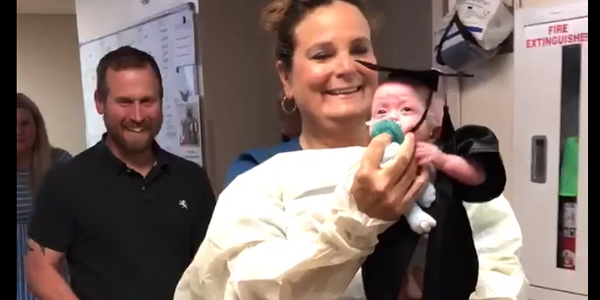 Parents fight for survival of their extremely premature baby

After suffering two miscarriages in the past year, Molli Potter and her husband Robert were determined to fight for the life of their unborn son. But the fight on their hands was a big one.

Because of pregnancy complications, the boy would need to be delivered extremely premature, reported AL.com. Most hospitals consider 24 weeks of gestation “the age of viability,” but Molli wasn’t there yet. The couple’s local Florida hospital gave the child only a two percent chance of survival if he was actually born. And if he did survive, they said, he would be left disabled.

Robert called 16 hospitals before finding one willing to take a chance on their situation: the University of South Alabama Children’s and Women’s Hospital. There, doctors performed an emergency C-section, saving the lives of both mother and son.

Cullen Potter was born in March at 22 weeks and two days gestation. He weighed a mere 13.9 ounces.

In a Facebook post, Molli praised the hospital and staff, saying, “They believe in these small babies and give them the fighting chance they deserve. I pray [that] more doctors and hospitals see stories like my son’s and many more, that they will reconsider their policy and give all the babies the chance they deserve.”

On August 21, Cullen Potter (no relation to Harry) – now weighing 5 pounds 11 ounces with no disabilities at all – was ready to finally go home. Molli bought him a graduation gown, taken from a stuffed animal at a Build-a-Bear store, that would fit his tiny frame.

The boy who lived received love and applause from the nurses and staff whose tender care nurtured him through his challenging birth and the aftermath. Cullen’s dad Robert declared, “He’s definitely a miracle, in more than one way.”

(Watch Cullen’s graduation below or on the hospital’s Facebook page):