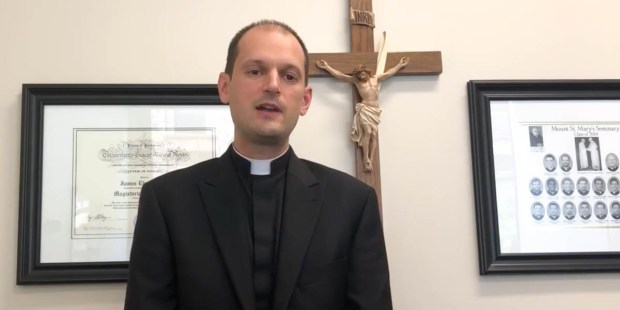 Historic basilica will be open all day, sending missionaries out to bring the Good News to city’s homeless.

Of all of America’s major cities, Baltimore has acquired one of the worst reputations in recent years. Riots that broke out after a death involving police and a young African-American male dominated the news in early 2015. And the city recently has had one of the highest homicide rates in the nation.

Fr. James Boric, a young priest who is pastor of one of the city’s highest-profile churches, is all too aware of the difficulties. He wrote recently to his parishioners at the Basilica of the National Shrine of the Assumption of the Blessed Virgin Mary about “Eric,” a man who begs nearby.

“He is addicted to heroin and various opioids,” Fr. Boric wrote. “Because of the poisonous additives in the drugs he consumes, he has sores in his fingers and his arms that literally go down to his bone. He can’t even put his hands in his pockets without feeling excruciating pain. Mentally, he is distraught. I can often hear him screaming from the top of his lungs as I pray in the rectory chapel.”

The priest also pointed out that there are three African-American women who sleep in the bus stop directly across the street from the Basilica. “I have personally paid for hotel rooms to get them out of the cold on the most brutal of winter nights,” he confided. “But at over $100 a night at the local hotel, I can’t afford to put them up for long.

“There are hundreds of Erics and bus-stop ladies in Baltimore,” he said. “But what are we doing to help them … to love them … to bring Christ to them?”

This week, Fr. Boric’s response to these and other ills is beginning to take shape. If all goes well, it could be transformative for his parish, and for the city.

As he explained in an interview, it’s not “rocket science” to figure out the Christian response to rampant despair, whether it takes the form of violence, homelessness, addiction or other ills. The infrastructure is there: the beautiful and historic 200-year-old basilica and the people who make up the parish. It’s just a matter of finding ways to make those elements work together more effectively.

More fundamentally, Fr. Boric knows he is not a savior for Baltimore. Christ already has the title “Savior.”

“If the City of Baltimore is going to change, it needs Christ. The only real solution to racism, violence, drug use and broken families is Jesus Christ,” he wrote. “Who is going into the neighborhoods and proclaiming the Gospel? The Mormons do it. The Jehovah Witnesses do it. But where are the Catholics?”

In broad outline, the new approach will be both inward- and outward-looking — an approach involving action, but action based on prayer.

Catholics believe Jesus Christ is present and alive in the Blessed Sacrament — the bread that is consecrated during Mass — because at the Last Supper he blessed the bread, saying “This is my body” and instructed his followers to “do this in remembrance of me.” His real presence in the Eucharist is manifested both in the consecrated bread the faithful receive at Mass but also in the hosts that are reserved in each church’s tabernacle. At special times of prayer, a priest places one of these hosts into a special stand, a “monstrance,” that is displayed, or exposed on the altar, for the faithful to venerate and pray in front of. For many, this is a time of meditation, when they believe they can listen to the voice of God speaking silently to their hearts.

So the first part of Fr. Boric’s plan is to make this kind of prayer, known as “adoration,” available all day long — for anyone who comes into the basilica, even if they are not Catholic and cannot receive the host by mouth. While the basilica has closed at 4 o’clock in the afternoon in the past, its opening hours have now been extended until 8 p.m., with adoration taking place for most of that time.

That change required raising money to pay for additional security, but for Fr. Boric, it’s worth it. No longer will those seeking some quiet prayer time, such as the stressed-out office worker or those facing serious illnesses at nearby hospitals, be met by locked bronze doors right before rush hour begins.