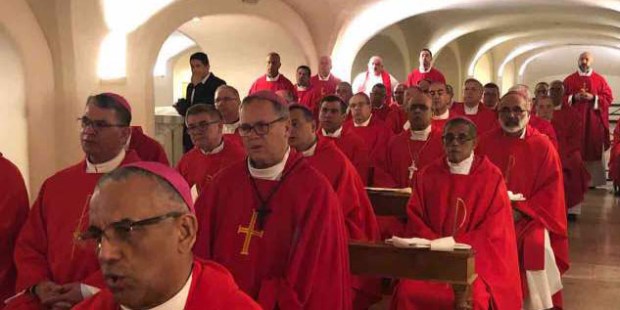 Venezuela is going through what is perhaps the most grave crisis in its history. The Venezuelan bishops are beginning their meetings with the Holy Father and the Roman Curia, according to the tradition of the ad limina visits to Rome. It will be their first meeting with Pope Francis, since the last two visits were in the year 2002, when Saint John Paul II was Pope, and in 2009 during the pontificate of Pope Benedict XVI. On this occasion, nine years later, the Venezuelan bishops will speak with the Argentinian Pope about the grave situation in their country, which has been fragmented and plunged into a profound economic and social crisis.

Maria Lozano of the international Catholic charity and pontifical foundation Aid to the Church in Need (ACN) interviewed Bishop Mario Moronta of the diocese of San Cristóbal in Venezuela, and spoke about the importance of their visit at such a crucial moment for the future of the country.

When exactly is your ad Limina visit, and when are you expecting to see the Holy Father?

The Ad Limina visit will take place between the 6th and 15th of September. It will begin officially with a Eucharistic Celebration in the Basilica of Saint Peter, led by the president of the Venezuelan bishops’ conference (CEV) Archbishop José Luis Azuaje of Maracaibo. Pope Francis will receive all the bishops on September 10 in the morning.

What is the current situation in the country?

The crisis has become still more acute. Now with the economic devaluation, even though there are measures which apparently seek to help the people, great confusion has been created. On the other hand, the situation has worsened with regard to respect for the people and in relation to the political situation. There is no confidence in our political leadership. There are so many Venezuelans who are now emigrating to other countries, with all the dire consequences that this entails.

What are the greatest concerns you have that you wish to share with the pope?

There are many of them. The first thing we will say to the pope is that we will always continue with the evangelising mission proper to the Church, but always alongside the people, close to the population and especially to the poorest. We will tell him that our great concern is the dignity of the human person, illuminated by the Gospel. And of course that we are not remote from the difficulties and problems that we will tell him about, but that at the same time we are builders of bridges and of hope for a suffering people.

Why is this visit to Rome so important?

Apart from the fact that this is an activity we normally undertake every few years, the importance of it at this time lies in the opportunity it gives us to reaffirm our communion with the pope and the universal Church. For this reason we see it as a manifestation of God’s grace for the enrichment of all. To this we should add the knowledge that we will be confirmed in our mission by the Successor of Peter. At the same time we wish to express our support and consolation to the pope at the present time when he too is facing attacks on his person.

What can we do so that this visit can bear fruit?

Within my own diocese, and following the directives of the episcopal conference, I have made a special request that on September 11, a special day of intense prayer should be held for the ad Limina visit and its fruits for the whole country. That particular day is the feast of Our Lady of Coromoto, the Patroness of Venezuela. For this reason we have suggested that in the various parishes there should be exposition of the Blessed Sacrament from early morning until the evening and that every household should likewise be invited to recite the Holy Rosary and at the same time the sick and elderly be asked to unite themselves in prayer from their own homes for the intentions of the ad limina visit. I also think that in addition to motivating people to prayer for the pastoral success of the visit, it is important to make them realise that it is not simply a tourist trip or a purely bureaucratic event, but rather an expression of the ecclesial communion of the bishops and the Church in Venezuela. I believe that this visit is taking place at a particularly crucial moment in the history of our country. For this reason we see it as an expression of the grace of God which will enrich us all.