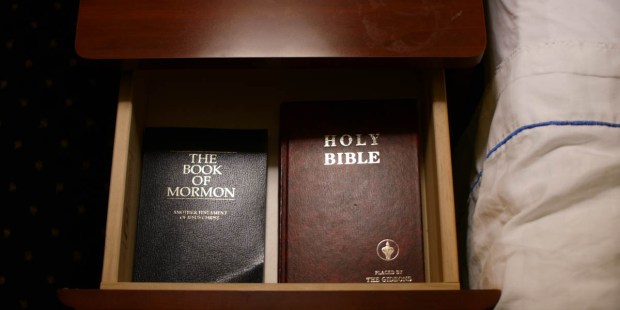 “Marriott, whose namesake founding family is active in the Mormon church, has been putting both the Bible and the Book of Mormon in its rooms since opening its first hotel in the late 1950s,” AP explained. “Like most major chains, Marriott doesn’t own the majority of its hotels. However, it stands out from the other companies by requiring—in franchise or licensing agreements—its 6,500 properties to have the books in each room.”

In a statement, Marriott contended that “many guests who are not digitally connected … appreciate having one or both of these books available.”

“It’s a tradition appreciated by many, objected to by few,” the corporation said.

The wire service reported that online discussion about Marriott’s practice revealed that some travelers are not bothered by seeing a Bible or a Book of Mormon in the room.

“But others say they have complained to managers and asked for the books to be removed,” AP said.

One who appreciates the presence of the Good Book is Jennifer Moody, a management consultant and co-author of the travel blog “From Home and Back.” Moody, a Methodist, said she thumbed through the Bible in her hotel room on Sept. 11, 2001, the day Islamic terrorists attacked New York’s World Trade Center and the Pentagon in Washington.

“Finding something familiar and reassuring to turn to can provide comfort,” Moody said. “If the presence of those books can be a comfort to others, then their placement is well-served.”

Marriott gets the Bibles for free from Gideons International, a group that donates Bibles to prisons, hospitals, hotels and other public places, AP explained. The costs for the Books of Mormon are shared by the Marriott Foundation and The Church of Jesus Christ of Latter-day Saints.

Other hotel chains also provide Bibles, but on a voluntary basis. Hilton and IHG, which owns Holiday Inn and other brands, say they let local hotel managers decide whether to offer Bibles. Hyatt has no official policy, but says it will obtain religious texts if guests ask for them.

But the number of U.S. hotels that offer religious materials in their rooms has dropped over the last decade, to 79 percent in 2016 from 95 percent in 2006, AP said.