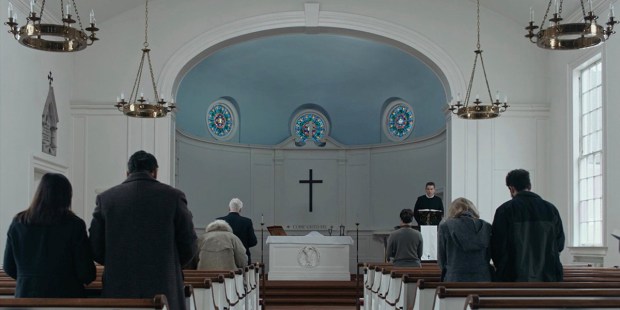 Director Paul Schrader’s dramatic film is an eloquent and chilling warning of what happens when we search for meaning outside of God.

By the time Paul Schrader’s First Reformed (now available for streaming) begins, it’s already far too late to avert its tragedies; its crises have passed the tipping point long before the slow, silent opening shot.

Reverend Ernst Toller (Ethan Hawke), the pastor of a “souvenir shop” church, is already dying when we first see him. He has undiagnosed cancer, a fact that he intentionally hides from himself even though it fills his life. When he discovers that he can no longer ignore the problem, it is already months too late to act.

The Earth is also dying, and when we first hear its case described with manic passion by a doomed almost-parishioner named Michael (Philip Ettinger) and echoed more calmly by his wife, Mary (Amanda Seyfried), we begin to recognize a pattern. The ecological crisis is, for many, undiagnosed because intentionally hidden, even though it fills our lives. When we discover that we can no longer ignore the problem, we are already decades too late to act.

But Toller’s cancer and the Earth’s pollution are only images of something else that is dying: Christianity. Somewhere, somehow, a tipping point has passed, and the Christianities we see in First Reformed can no longer answer the human problem, whether it’s the irrational religion of irreconcilable ideas professed by Reverend Toller or the commercial religion of psychological aphorisms vended by Reverend Jeffers (Cedric the Entertainer) at the nearby megachurch. A spiritual canker has eaten away the fragrant Rose of Sharon, and we have conspired to pretend the rot has not filled our lives. When we discover that we can no longer ignore the problem, we are already centuries too late to act.

Neither Toller nor Jeffers know a religion where God has become man, but are left with the naked Word, stripped of his flesh. They offer different versions of a pseudo-Gnostic post-Christianity comprising an abstract and impersonal concept of God, an anodyne and content-free morality, and a confusing misapplication of traditional Christianity’s symbols. The problem is not that the river of the water of life has been dammed up; the problem is that it has been poisoned at the source.

This tragedy is the silent spring from which the film’s other crises flow. Guilt, alcohol, and cancer carry Toller in a fatal freshet that gushes out of the gaping wounds his fleshless post-Christianity cannot staunch. In crisis, he looks with desperation for something—anything—that might offer the answers he has sought for and not found in Christianity.

Michael’s radical environmentalism fills the gap. It sounds and looks like Christianity, replete with the Bible, penance, martyrs, mysticism, funerary rites, and above all eschatology. Unlike the Christianities Toller knows, however, radical environmentalism gives its practitioners a life that matters, and demands total sacrifice. “I’ve found a new way to pray,” Toller says after his conversion; the insipid God he knows has given way to a god worth praying to at last, one who is powerful, fearsome, and green.

But the green god quickly reveals himself to be red in tooth and claw. Fired with the conviction that “every act of preservation is an act of creation,” Toller’s long-stymied religious passion drives him to the logical conclusion that every act of destruction undertaken for the sake of preservation is itself an act of creation: still more, an act of worship. Yet all too horribly Toller discovers that he cannot coherently destroy his old world and create a new one, nor even destroy himself. The bloody god of ecology bears only false promises, just like the bloodless Jesus of post-Christianity.

When every available god has failed him, Toller throws himself into the last answer the film proposes to the human problem: wild and purely animal passion. This, too, is manifestly doomed, which the film drives home through its savagely abrupt conclusion.

This disturbing story is our own. We are tortured by religious questions we cannot escape, and the answers we find available in 21st-century America—the commercial psychology of post-Christianity, the desperate drama of scientific ecology, the obliviating release of animal passion—all fail. None of these can pull us back from the brink.

But all is not lost. From within the film’s seemingly nihilistic logic, a surprising seed of hope takes root. We do not need a new religion, a new secular ideology, or new bodily pleasures. Nor do we need to suppress the fundamentally religious aspect of our nature. We need an incarnate God who is red with his own blood, who cannot be followed except at the cost of all we have, who gives us not just ideas to play with but his flesh and his blood to eat, who refuses to remain at a comfortable distance. We need a God who has come to set the world on fire, and longs to see it burning.

We have such a God. First Reformed is an eloquent and chilling warning of what betides us if we pretend we do not.