Has Our Lady left us another image of herself, besides Guadalupe? 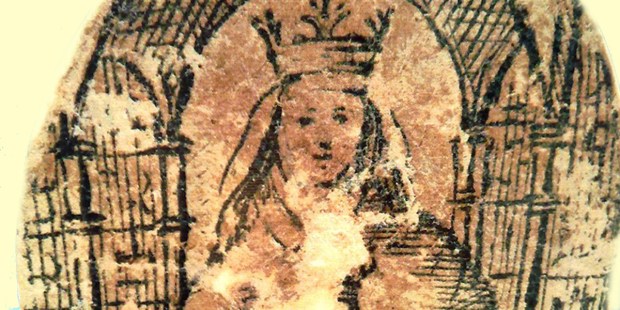 Though the depiction is tiny, the symbols are authentic to the time period and culture of 17th-century Venezuela.

A Venezuelan tribal chief, chosen by Our Lady to evangelize the Coromoto Indians, ended up being a modern-day Jonah who avidly tried to escape from his mission, but ultimately fulfilled it.

Twice Our Lady appeared to him, instructing him to be baptized. Twice he resisted. When she first appeared to him in 1651, the chief began learning the Christian faith, along with other members of the tribe but, worried about whether converting would affect his leadership role, he stopped short of being baptized and encouraged the other natives to do the same. Some went forward and were baptized anyway, but many followed the chief.

Our Lady appeared to him again in 1652, and he likewise ignored her plea.

The Blessed Mother, however, was not to be deterred. Meeting deaf ears, she took her leave, but left in the chief’s hand a tiny image of herself holding the Child Jesus in her lap. (The image is less than an inch tall.) Some time thereafter, the chief was bitten by a poisonous snake and seemed in danger of death. Remembering the apparition and Mary’s promise that if he got baptized, he would go to heaven, he urgently asked to be baptized.

News of the beautiful Lady who had appeared spread rapidly, and devotion to her grew. The rest of the Coromotos were baptized shortly after the chief himself had finally embraced the faith. A church was built in honor of Our Lady of Coromoto in the nearby town of Guanare in the 1700s. Later, in the 1980s, a shrine was built at the location of the 1652 apparition. Both churches have since been elevated to minor basilicas. A large statue of the Our Lady of Coromoto, as well as the original relic, is housed in the shrine.

The relic the Blessed Virgin left with the chief is the most authentic link we have to the apparitions themselves. The image was thoroughly analyzed during a process of restoration in 2009. Indigenous symbols found in the image, such as the style of the crowns worn by the Blessed Mother and Jesus, are authentic to the culture and time period of the Coromoto people in 17th-century Venezuela.

How the image itself was created remains mysterious and is believed to be miraculous. While the picture appears to have been drawn on the paper, the paper does not seem to have absorbed any ink or other such substance. In this way, it resembles the apparition of Our Lady of Guadalupe, which likewise looks to be painted on the tilma but seems to mysteriously hover just above the cloth without actually affixing to it.

Our Lady of Coromoto was declared patroness of Venezuela first by the Venezuelan bishops in 1942, and then by Pope Pius XII in 1949. She is remembered on September 8 (the feast of Our Lady’s birthday) and September 11, and February 2.

Our Lady of Coromoto, pray for us.

Aleteia is bringing you an introduction to some of the titles under which Mary is honored in Latin America. See here:

From Colombia, Our Lady of the Rosary: The miraculous story of the patroness of Colombia

From the Dominican Republic, Our Lady of Altagracia (“Highest Grace”): Why orange juice and orange sorbet should make you think of Our Lady

From Nicaragua, Immaculate Conception of El Viejo: Do you know the connection between St. Teresa of Avila, Our Lady, and Nicaragua?

From El Salvador, Our Lady of Peace of San Miguel: Mary will find her way into your life with creativity and persistence

From Ecuador, Our Lady of Quinche: When God brought a child back to life through the prayers of His Mother

From Paraguay, Our Lady of Miracles of Caacupé: No two stories of Our Lady are ever the same: A mother’s individualized love

From Chile, Our Lady of Andacollo: More marvelous than all Our Lady’s apparitions and miracles put together is this simple reality

From Peru, Our Lady of Evangelization: Do you know the first evangelist?