St. Teresa had to defend the Church against attacks from the inside 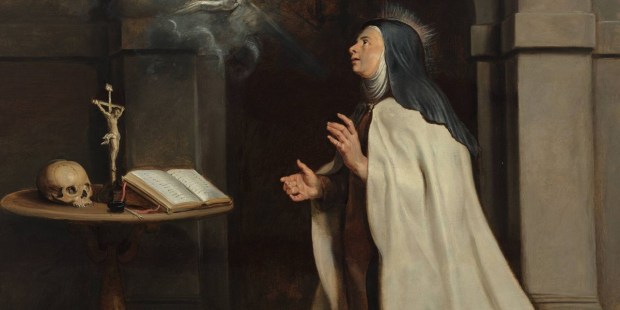 In many ages of the Church, there has been a crying need for reform. One of the most critical times was during the Reformation of the 16th century. Whole countries were abandoning Catholicism. Millions of souls found themselves ripped from their baptismal faith by the political and religious upheavals of the times. In Spain, though, the situation was stable. There, long before Luther appeared on the scene, the Catholic monarchs Ferdinand and Isabel had thoroughly purified the Church. As such, the Iberian peninsula was largely immune to the inroads of Protestantism.

Security, however, often brings laxity. When people find themselves in a generally stable religious situation, with little possibility of outward persecution, faith can become comfortable. This is a temptation in any age. Spain was powerful, wealthy, and solidly Catholic. The faithful could, and often did, rest easy in that knowledge, and allowed their religious observance to wane accordingly.

This was the case even in those communities dedicated to following the Gospel call of perfection. In monasteries and convents, life went on much as it had during the late Middle Ages. The religious orders, while not actively corrupt, were prosperous. They had extensive property and were well endowed. The engine rooms of Christian holiness, in other words, had embraced that mediocrity that the Gospels demonstrate is the enemy of sanctity.

One of those comfortable Christians was a young girl named Teresa. She was pretty, vain, headstrong, and a lively conversationalist. She decided to join the Carmelite convent of the Incarnation, where she could live a comfortable religious life among aristocratic sisters, and enjoy frequent visitors in the parlor to exchange gossip. Enclosure of nuns was not enforced, and the religious rule was more honored in the breach than in the observance.

Read more:
Pope Francis: “Whoever Gossips Is a Terrorist”

Teresa spent 20 years in this life, consoling herself that — as a Catholic in Spain and as a consecrated religious — she was doing enough. Yet, being a brilliant and driven person, she knew something was missing. She found it one day when looking at a picture of the Ecce Homo, a type of painting that vividly depicted the face of the suffering Christ. To follow such a Man was not to chose the mediocre life. She decided to move in an entirely new direction, dedicated not just to being a good person, but to pursuing sanctity itself.

She decided upon a wholesale reform of the female branch of the Carmelites. A male branch was later added under the sponsorship of her close friend, St. John of the Cross. Together they founded the Discalced (or shoeless, signaling their return to the austerity of dress that simple sandals represent) Carmelites. They met exceptional resistance from those who were invested heavily in the status quo. Sometimes the most difficult resistance to overcome is from those with a vested interest in the way things are. The reformers were marginalized and persecuted, and John was even imprisoned for nine months by his own religious community.

Yet by her stubborn persistence, Teresa’s order grew. It attracted many vocations for, as is true in any period in Church history, young Christian men and women are attracted to orthodoxy and heroism, and not to diversion and corruption. When one seeks a vocation, one wants to put one’s heart and soul into the quest for perfection, as demanded by Christ (Mt 5:48), Who did not say, “Be ordinary, as my heavenly Father is ordinary,” or “Be good enough, as my Heavenly Father is good enough.”

Teresa succeeded in spite of many in the Church who wanted to quash her movement. Several reasons present themselves. In the first place she was one of the finest mystics in Church history, describing her experiences in prayer and in communion with God in a series of famous works. In the midst of the world, she was always centered in Christ. Nor did Teresa stop being loquacious. Rather, she just located her propensity to talk to a different place; “mental prayer is nothing else but friendly conversation, frequently talking alone with Him Whom we know loves us.”

In spite of penances and religious austerities, she always maintained a sense of humor, and often wore a smile. She even prayed for deliverance from gloomy saints. It is for this and many other reasons she is called the “saint of common sense.”

Her teaching — which would later be echoed by her namesake, St. Therese of Lisieux — was that holiness did not consist in extraordinary wonders and experiences, but in doing ordinary things extraordinarily well. For her every moment was of eternal significance, each one offering an opportunity to do something for God and neighbor. She had no time for trifles, and counseled her sisters to focus on the most fundamental realities. Given the crises of corruption and resistance in the 16th century, she reminded them, “This is no time to treat with God for things of little importance” (Way of Perfection c. 2).

She was able to be successful in her work of reform not only because of her single-mindedness and brilliance, but because, among the vicissitudes of the world, of setback, corruption, resistance, and indifference, she had a true center:

Let nothing disturb you,
Let nothing frighten you,
All things are passing away: