NICU nurse reunites with preemie baby she helped after 28 years 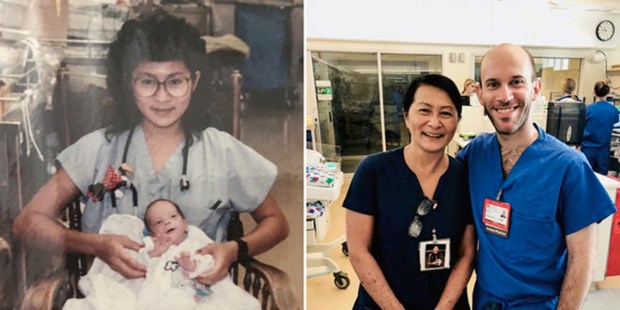 “I’m taking care of babies with the nurse that took care of me,” says Brandon Seminatore.

When an infant is released from the NICU, it’s a joyous event not just for the parents, but also for the dedicated hospital employees who were along for the little one’s journey to wellness. So when those employees witness those babies thriving as adults years later, it’s particularly heartwarming for them, as was the case for NICU nurse Vilma Wong.

She was recently in the middle of a shift at Lucile Packard Children’s Hospital in California, where she’s been a devoted nurse for 32 years, the hospital’s website reveals. A pediatric neurology resident named Brandon Seminatore was doing rounds on her team that day. “I asked who he was and his last name sounded very familiar,” Vilma explains. She continued inquiring and then, recalling that a baby she’d been a nurse for decades earlier had the same last name, she asked if his father was a police officer.

At that, “there was a big silence,” Vilma says. “Then he asked me if I was Vilma. I said yes!” Evidently, Brandon himself had spent over a month in the NICU, having been born at just 29 weeks gestation. When he started working at the same hospital where he was born, Brandon’s mother had suggested he look for Vilma, the nurse she and his father had bonded with over so many days and nights in the NICU with their preemie son.

He never actually searched for Vilma though, figuring that she had retired. But amazingly, he wound up face-to-face with her once again.

“Meeting Vilma was a surreal experience,” Brandon said. “When [she] recognized my name, it truly sunk in that I was one of these babies. I’ve come full-circle and I’m taking care of babies with the nurse that took care of me.”

Brandon declares that his and Vilma’s “story is for families with children who have had a rough start in life. I want to give them hope.” And who better to be a picture of hope than a pediatric neurologist who started out in the same unit where he’s helping babies stay alive?