Pope to Jesuits in Ireland: We need more than to turn the page on abuse 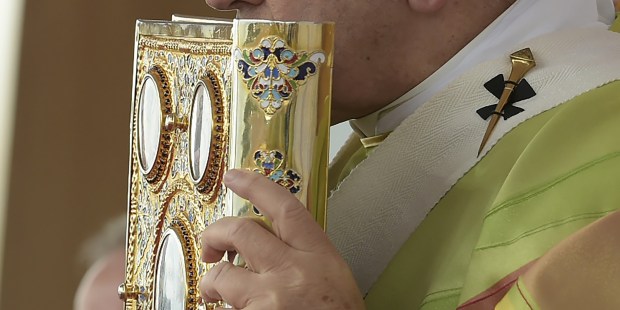 VATICAN MEDIA | AFP
In this handout photo made available by Vatican Media, Pope Francis leads the Holy Mass at Phoenix Park in Dublin on August 26, 2018, on the second day of his visit to Ireland to attend the 2018 World Meeting of Families. / AFP PHOTO / VATICAN MEDIA AND AFP PHOTO /
Share
Print
I.Media for Aleteia - published on 09/13/18

Says it’s time to clean up, change consciences, and call things by their name

“Help the Church in Ireland to put an end” to sexual abuse and the abuse of power committed by members of the clergy, said Pope Francis during his meeting with the Jesuit community in that country on August 25, 2018, during his trip there for the World Meeting of Families. His words were published in the Jesuit magazine Civiltà Cattolica on September 13.

When traveling outside Italy, the Argentinean pope, the first Jesuit pope in history, always tries to meet with the local members of the Society of Jesus. He is usually accompanied by Fr. Antonio Spadaro, director of Civiltà Cattolica, and the contents of these closed discussions are often subsequently published in the magazine.

The pope arrived late to his meeting with the Jesuits of Ireland because of a meeting with victims of sexual abuse and abuse of power and of conscience. That meeting, he explained, “particularly touched my heart.” These forms of abuse are facilitated by an “elitist and clericalist” Church, and reflect “an inability to be near to the people of God,” he said.

Read more:
What is “clericalism?”

The pontiff then gave the Jesuits a mission: “Help the Church in Ireland to put an end to this.”

“I don’t mean simply turn the page,” the pope said, pointing to the need to “clean this up, change consciences,” and “not be afraid to call things by their name.” It’s necessary to “seek out a cure, reparation, all that is necessary to heal the wounds and give life back to so many people,” he declared.

In response to questions from one of the Jesuits present, the Bishop of Rome explained that it was, first of all, necessary to denounce the known cases of abuse.

In addition, the head of the Catholic Church asked the Jesuits present to “love sinners” in imitation of Christ.

“Jesus came to bring joy, not moral casuistry,” he said. For the pope, the “freshness of the Gospel” should be particularly manifest during the Sacrament of Confession: it should be “an encounter with Jesus Christ, not a torture room or a psychiatrist’s couch.”

Read more:
Confession is “the only real space of authentic freedom”

In order to preserve that joy, Pope Francis recommends having a sense of humor, “a fruit of the consolation of the Spirit.” He revealed that every morning, for 40 years, he has prayed the prayer of St. Thomas More asking for a sense of humor.

That prayer ends with the words, “Allow me the grace to be able to take a joke to discover in life a bit of joy, and to be able to share it with others.”