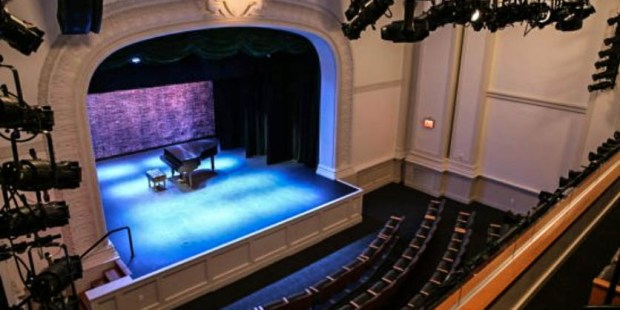 Project promotes the true, the good, and the beautiful in midst of secular culture.

There’s a cool website—cool for people who are interested in learning trivia about New York City—called New York Songlines. You can look up any street in the Big Apple, and the site gives you information about what is found at a particular address and what used to be there.

For Number 18 Bleecker Street in Manhattan, it had this to say:

Loretto Auditorium. This is part of Our Lady of Loretto Church—I’m not sure whether it’s active or not. Loretto, meaning “Hill of Laurels,” is an Italian shrine that contains a house, relocated from Palestine during the Middle Ages, that is held to be the house in Nazareth where the Archangel Gabriel appeared to Mary.

It’s a cool website, but it hasn’t been updated lately. Number 18 Bleecker Street is active—very active. The name Loretto Auditorium still hovers high up on the building’s facade, but the complex is better known today as The Sheen Center for Faith and Culture.

And, like the house of the Blessed Virgin Mary, which was miraculously transported from Nazareth to Loretto, the Catholic Church-sponsored Sheen Center has been, as it were, dropped from on high into a neighborhood that has a very mixed reputation. CBGB, the club where Blondie and the Talking Heads got their start, was a block to the East, on the Bowery. Lenny Bruce got arrested down the street in 1964 for using obscenities in his act at Cafe au Go Go. Planned Parenthood, the largest provider of abortions, is right next door to the Sheen Center.

Loretto Auditorium was once part of an active Italian Catholic parish, long closed, which went through a period as a homeless shelter. The nearby Bowery was known as a place where you’d find the down-and-out.

No longer. It’s been gentrified, and it’s one of the priciest places in town.

“My father would be rolling over in his grave if he heard that the cheapest room in the Bowery Hotel is $375 a night,” said William Spencer Reilly, executive director of the Sheen Center.

Three years ago, after someone pointed out what a beautiful theater the Loretto Auditorium was, the Archdiocese of New York decided to transform it into an arts center.

“Last night when I was here for a reception, I met people who would not be in church,” Cardinal Timothy Dolan said in a promotional video. “But yet they will come here. They’re interested in the arts, culture, books, music, dance and theater. That’s the genius of the Sheen Center.”

And, while people won’t get the same thing they get in a church, they might, Reilly and others at Sheen hope, be inspired by the kind of wisdom of the faith that has also inspired much of the arts.

“Our mission statement [is to focus] on the true, the good and the beautiful, as they’ve been expressed throughout the ages,” Reilly said in an interview, “to use the arts as a surprising way to bring people to Christ. I’m particularly interested in reaching people on the fence. While we do plenty to preach to the choir, I’m more interested in the evangelizing opportunity of this place. … To use the arts as a way in.”

Reilly commented, “Cardinal Dolan, to his credit, saw that this would be a new way to reach young people that might give pause or second thoughts about Catholicism.”

The center takes as its model the work of Archbishop Fulton J. Sheen, a learned, eloquent preacher who had a wildly successful series of talks on television in the 1950s and 1960s. “When he was on TV, only 40% of his audience was Catholic,” Reilly pointed out. Sheen led audiences into considerations of matters of faith by beginning with topics that most people could relate to, whether they were Catholic or not, Christian or not.

The Sheen Center has a variety of ways to do that, whether it’s a film screening, concert or theater performance in its 274-seat Loretto Theater, a play in its off-off Broadway black box theater downstairs, or an art exhibit in its gallery.

One example is last season’s “Jesuits and Jedis” presentation, where Vatican astronomer Brother Guy Consolmagno discussed the relationship between faith and science. The presentation, using the “language and lens of Star Wars,” according to director of programming administration David DiCerto, was so successful that Sheen decided to reprise it, but this time, keeping with the Star Wars theme, calling it “The Dominicans Strike Back.” On September 29, two members of the Dominicans—the Order of Preachers—will continue the philosophical discussion where the Jesuit astronomer left off.

The Center’s annual Justice Film Festival, November 2-4, will screen three films: Emanuel, about the Emanuel A.M.E. Church shooting in Charleston, South Carolina, in 2015; The Heart of Nuba, about American doctor Tom Catena, who runs the only hospital in the Nuba Mountains of war-torn Sudan; and American Beat: Cops and Refugees Join Forces in Boise, about the efforts of Boise, Idaho, police officers to integrate and mentor refugees from war-ravaged parts of the world.

Two theater productions of note this year are set in the two world wars of the 20th Century: All Is Calm, about the famous Christmas Truce of 1914, and the U.S. premiere of All Our Children, about the Nazi program to eliminate children with special needs.

“Civility in America” returns this season on Dec. 18, as two Princeton professors, Robert P. George and Cornel West, who are ideologically different but are good friends, go head to head on the topic of free speech in the search for truth, both on campus and in wider society.

“The idea is to get someone on the left and someone on the right together and to go at it, but not just in a civil way but also to be forced to listen to each other in a format that’s a little different, particularly in light of people yelling at each other and not listening to each other on TV, from the left and right,” Reilly said of the series. Speakers have also included Jesuit Fr. James Martin, who has spoken and written on ways the Church can be more welcoming to homosexuals, and conservative New York Times columnist Ross Douthat.

“It’s hitting the zeitgeist right on the money as far as what’s going on in America, as far as the need not just for civil conversation but nuanced and intelligent conversation,” Reilly said. “People make the assumption that if someone is a member of the opposite political party they can’t even talk to them.”

Bishop Robert Barron, creator of the Catholicism series, has been a speaker at the Sheen Center, and DiCerto recalled a point he kept making that struck a chord: when it comes to engaging the culture: It’s important for the Church to “lead with beauty because we live in such unfortunately divisive days that the true and the good are so hotly debated, but beauty is that last opportunity to find some sort of common language that will restart a dialogue.”

In DiCerto’s view, the Sheen Center is “a proposition, an idea, that can help transform the world.” He cited a writing of Cardinal Joseph Ratzinger, the future Pope Benedict XVI, who said that the two most effective tools the Church has to evangelize are “the saints we give birth to as a community of faith and the art we create.”

Rita Simmonds is the events coordinator of the Crossroads Cultural Center in Manhattan, a project of the Catholic lay movement Communion and Liberation, which has some of its events at the Sheen Center.

“They’re putting out a lot of really good events and able to get a great diversity of presentations,” Simmonds said. “It’s in a terrific location. There are a lot of young people around there.”

In fact, the majority of Sheen’s audience is aged 28 to 35, according to Reilly.

Joseph Pearce, the literary biographer and playwright whose World War I-era play Death Comes for the War Poets enjoyed a three-week run at the Sheen Center last year, said the team at the center were “hugely supportive, assisting me, the producer and the director in the marketing and promotion of the play.

“Apart from my own personal experience, and the gratitude I feel, I believe the Sheen Center to be a crucial catalyst for the revival of the Catholic arts in New York City and beyond,” Pearce said. “Its success can only inspire similar cultural initiatives, all of which will serve to nurture and nourish the regeneration of culture at a time when edifying art is needed more than ever.”

“I think we’re surprising people,” Reilly said. “There are a lot of people out there who are so anti-Catholic that they wouldn’t set foot in a place like this, ordinarily. People who have fallen away or just ambivalent, to get them in here and entertain them and hopefully inspire them. And perhaps during one of the talkbacks, which we do more of than most places, is where we think we can do the most good, where they might think of something they hadn’t seen in that light.”